Even after a year, the sector is reeling under several problems when it comes to the payment of salaries and honouring work orders.

VISAKHAPATNAM: A year has passed since Rs 500 and Rs 1,000 notes were invalidated, but the micro, small and medium enterprises (MSMEs) sector in Visakhapatnam district is yet to recover from the demonetisation of 86 per cent of the currency in circulation.Acute cash crunch in the first three months after demonetisation left a majority of the 5,000 MSME units in Visakhaptnam, the financial capital of Andhra Pradesh,  high and dry as they faced an estimated Rs100 crore loss owing to the cancellation of work orders, interests on loan penalties levied on late dispatches and other issues in the three-month period.

Even after a year, the sector is reeling under several problems when it comes to the payment of salaries and honouring work orders. The problems have roots in the way MSMEs function. As the sector is inherently cash-driven, most of the units transact in cash, be it procuring raw materials or payment of salaries.
According to the District Industries Centre (DIC),  of the 5,000 MSMEs in the district, a majority deal with agro-based products and services such as pickle manufacturing, food processing, manufacturing of paper bags and tyre re-treading among others. 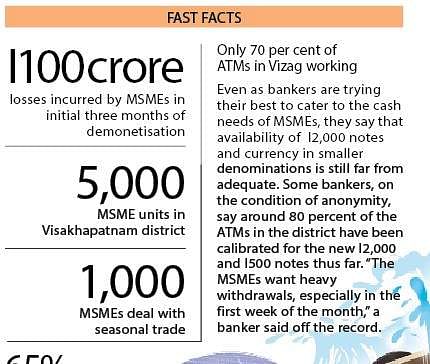 Nearly 4,000 units trade throughout the year while around 1,000 are involved in seasonal businesses.
“A majority of the seasonal MSMEs downed shutters post-demonetisation owing to acute cash crunch. Many of them are yet to resume production. As trade for seasonal agro-based industries begins in February, it is yet to be known how many have closed down permanently,” says Visakha Autonagar Small Scale Industrialists Welfare Association (VASSI) leader Balaji.

In the first quarter of this fiscal,  most of the MSMEs cut a sorry figure. It is the cooperation of the workers that has been helping us survive till now,” explains N Sitaramayya, owner of Sri Srinivasa Agro Products of Pendurthi.  The unit used to register a turnover of almost `10 lakh with a 20 to 30 percent profit margin before demonetisation.