At a time when cash flow is increasing after note ban, GST causes another slowdown

VIJAYAWADA:  Even a year after the demonetisation of high value currency notes, the real estate sector, which was hit hard, is yet to recover as the buyers are adopting a wait and watch policy and postponing their decision hoping that the situation will get better sooner or later.   At a time when the flow of cash into the market has been increasing gradually after the note ban, the Goods Service Tax (GST) brought by the Centre once again led to a slowdown in the sector as the tax burden has made the stakeholders in the real estate sector rethink. 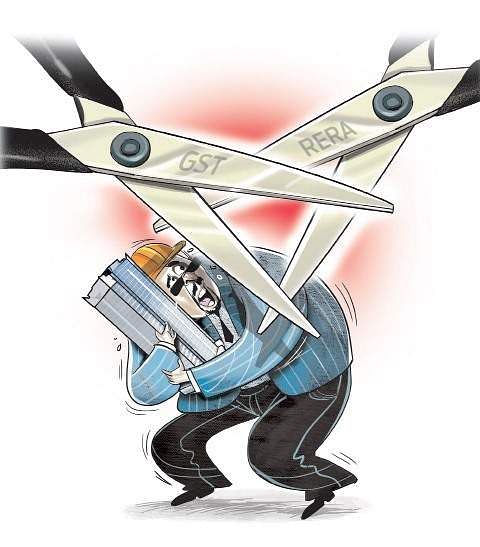 Amaravati, the capital city under development stage, which expected to witness a real estate boom, did not witness any such development with the Centre taking the decision to demonetise currency when the realtors were preparing the ground for investing on land in the capital region.Chief Minister N Chandrababu Naidu, during an informal chat with media-persons recently, admitted that real estate sector was hit hard by demonetisation. As the revenue being generated through the Stamps and Registration Department is not up to the mark, officials say that real estate sector suffered a setback after demonetisation and the situation has not improved because of the roll out of the GST.

CREDAI Andhra Pradesh Chapter president A Siva Reddy said that only those who are in urgent need of houses are buying plots and people are not preferring real estate sector as an area for investment anymore.
In fact, the GST compounded the aftermath effects of note ban in the State. Apart from tax on the purchase cost of land, the GST imposed on construction materials like cement and steel is forcing the buyers to adopt a wait and watch policy, said CREDAI general secretary H Sudhakar.

“The GST Council meeting held in Guwahati on Friday, despite reducing the slab on different goods to 18 per cent from 28 per cent, did not take any decision on the reducing tax of steel, cement and some other construction materials, which still are in the 28 per cent tax slab,’’ he said. He observed that that the chances of real sector picking up momentum lie on reduction of GST.
Admitting that people are unwilling to purchase property after demonetisation, another realtor said that people are still adopting a wait and watch policy and are investing on gold and other sectors instead of land.