Uppada: A craft going to pieces

It takes a family of weavers nearly a month to create a single Jamdani silk saree. But the craft, passed down through generations, is under threat from technology and spurious versions

when we talk about Jamdani silk sarees, Uppada is the name that pops up in one’s mind. It is a village on the sea coast, not far from Kakinada in Andhra Pradesh. It is famous for the handloom silk sarees made by 1,000 weaver families. It’s a traditional craft passed down generations but it faces a threat to its survival. The traditional market for handloom sarees is being encroached upon by duplicate Jamdani silk sarees woven with the latest technology. 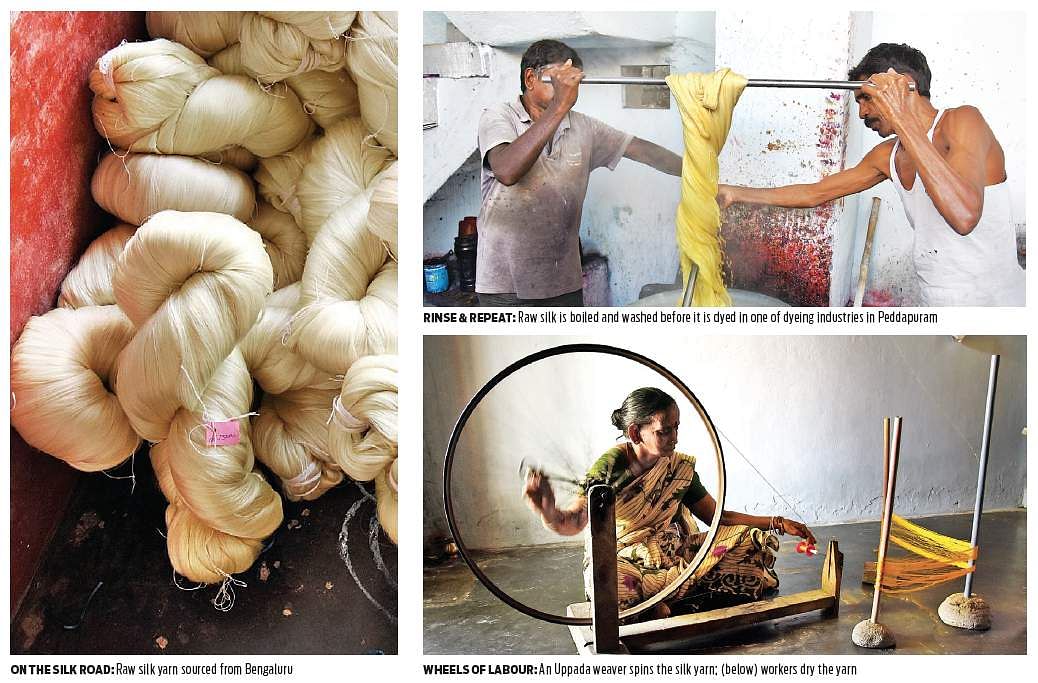 It takes an entire weaver family working hard on the handloom for a month to weave a single saree which might fetch them S8000 if sold. To get by, the weavers accept piece work from businessmen who provide them the silk yarn to make Jamdani and Uppada silk sarees. Piece work pays S500 per saree.

It’s not the same thing as making a saree entirely by oneself but in an occupation challenged by market forces, it keeps the head above water. However, from being the proud upholders of an ancient skill, the weavers of Uppada have been reduced to just one link in a chain. The life of an Uppada saree begins in Bengaluru where raw silk is sourced at S6000 a bundle. Businessmen from Peddapuram procure the raw yarn, which is given to one of the 15 dyeing industries in that town. Dyeing of silk yarn is one of the main processes before weaving a saree. After boiling, dyeing and drying, the silk yarn is sold to wholesalers, who commission the weavers of Uppada to turn it into sarees.

However, this value chain is under siege as is evident from the dwindling of the dyeing industries in Peddapuram and the consequent layoff of workers. Power-looms, which can make sarees faster and at less cost per unit, have been eating into the handloom weavers’ market. In addition, sarees from elsewhere, made in the Jamdani style, are flooding the market. Youngsters from the weaver families of Uppada migrate to towns, preferring to work as daily wage labourers rather than practice their family craft.