Women’s empowerment in Andhra Pradesh gets a fillip

Naidu says Amaravati declaration will be an inspiration for other States; Kailash Satyarthi lauds govt’s efforts. 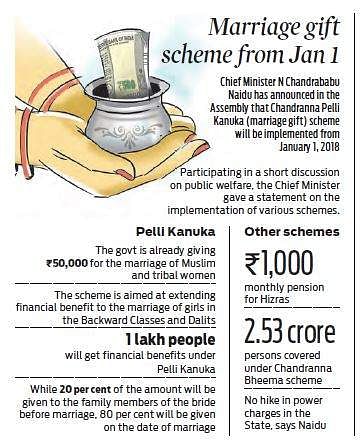 Speaking on the occasion, Naidu said the declaration, formulated by the State government, will be an inspiration for other States to come up with  such a document for women empowerment. Naidu reiterated that the TDP government is committed to the empowerment and development of women.
The State government has formulated the declaration after taking into consideration the opinions voiced by several women during the National Women’s Parliament (NWP) held in February 2017 at Pavitra Sangamam.

Kailash Satyarthi lauded the AP Government for making efforts for women empowerment.  He said Naidu has good vision for the development of women and expressed confidence that Andhra Pradesh would become number one in India and the world under the leadership of Chandrababu Naidu.
Union Minister for Science and Technology Y Sujana Chowdary felt that women can handle any problem as they are playing key role in the household activities. Minister for Women Development and Child Melfare Paritala Sunita stressed the need to strengthen women politicians in the rural areas. He regretted women are still lagging behind in politics. Tourism Minister B Akhila Priya, SBI former chairman Arundhati Bhattacharya and others spoke. The programme, which was scheduled to start at 5 p.m., was delayed by three hours. Due to this, scores of women who came to attend the programme, returned before starting the main event.

Amaravati declaration
‘Amaravati Declaration,’ is a compendium on the guidelines for women empowerment formulated by the State govt, based on the ideas, issues and problems discussed at the National Women’s Parliament held in February this year
It aims at development of women in education, legal rights, health and nutrition, entrepreneurship, research and innovation, politics, social protection, sustainable development goals, social development and digital literacy