VIJAYAWADA: The YSR Congress used its ‘Brahmastra’ — the resignation of MPs — to force the BJP-led NDA government into according special category status to Andhra Pradesh, party president YS Jagan Mohan Reddy said on Friday. In the morning, soon after Parliament was adjourned sine die, YSRC MPs resigned and sat on an indefinite fast at AP Bhavan as announced earlier. 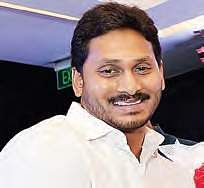 Speaking to mediapersons in Sangam Jagarlamudi village in Guntur district in the evening as part of his Praja Sankalpa Yatra, Jagan Mohan Reddy, describing his five MPs as Pandavas, said they sacrificed their LS membership and sat on an indefinite fast for the sake of five crore people of the State.

“It is unprecedented in the history of the country. We have been striving to get special category status for the last four years. We were the first ones to give notice of no-confidence motion, which shows our sincerity and dedication,” he said.

He opined that the impact of the resignations would have been more if Chandrababu Naidu listened to YSRC’s suggestion and got his MPs to resign. “All the 25 MPs from the State resigning en masse in protest would have sent a strong signal. But, it was not to be,” he said and added Chandrababu Naidu was more concerned about his selfish interests.

Making light of Chandrababu Naidu’s letter inviting his party to all-party meeting, Jagan said the topic as mentioned in the letter ‘was to discuss follow-up action on his visit to New Delhi’. “It is laughable.
What did he do in Delhi apart from meeting a few MPs like Hemamalini?” he said and dismissed Naidu as a leader lacking any credibility. Comparing Naidu with Hitler, he said both were born on ‘April 20’, that is why they acted like ‘420’ and depended on Goebbels’ propaganda. He dared Naidu to answer his 7 questions, including his ‘failure’ to pressure the Centre for SCS during seven months after forming the government when Planning Commission was in existence.

“Why has he accepted special package in lieu of SCS? Was he not the one who said SCS is a closed chapter ? Why has he suppressed SCS movement in last 4 years? Was GSDP and growth rate jacked up?”

Now we are on Telegram too. Follow us for updates
TAGS
YSR Congress Brahmastra Jagan Mohan Reddy Chandrababu Naidu