A major portion of the lake has gone bone dry, raising concern among residents of surrounding villages; many villagers migrated to urban areas in search of jobs.

ELURU: Depleting water levels in Kolleru lake spread over West Godavari and Krishna districts has been creating panic among the agrarian and fishermen communities. The drought-like situation is also worrying environmentalists.

Kolleru, touted to be the largest freshwater lake in Asia, is spread over 30,855 hectares (308 square km). However, the area extends up to about 901 square km if the water level reaches up to the 10th contour (maximum level). According to scientists and wildlife division authorities of the Forest Department, 189 species of birds are nesting in the lake. The water body is also home to rich flora and fauna. This apart, it provides livelihood for thousands of families.

Four rivulets — Tammileru, Gunderu, Budameru, and Ramileru — and about 67 major and minor irrigation canals flowing from the Godavari and the Krishna are the main sources of water for the lake. However, due to poor monsoon and negligence, the lake has been drying up for the last few years, causing great concern to ecologists, researchers, bird watchers, and tourists. 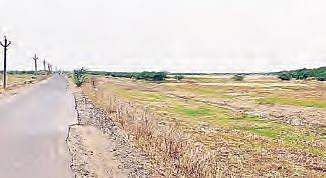 Parched lakebed
Parched lakebeds are seen in many parts of Kolleru, particularly in the northern and eastern sides of the lake i.e., in the upland areas. The situation will be severe if officials do not take measures to maintain water levels in the lake, say locals.Village elder Jayamangala Nagaraju says that many farmers and fishermen eke out their living in the lakebed villages in West Godavari and Krishna districts.  Saidu Tirumalesu, a villager, said that they submitted a memorandum to Collector K Bhaskar requesting release of water into the lake and increase the water level to help save the remaining flora and fauna.

A Fisheries Department official says that about 2,000 fishermen families and 55 Fishermen Cooperative Societies (each society comprising 80 to 100 fishermen) are dependent on the Kolleru lake.  “We urge the government to respond to the situation, take up dredging in canals and drains, and divert water from the Krishna to increase water levels in Kolleru, which will help farmers, fishermen, and villagers,” says Saidu Tirumalesu.  “It is a fact that many fish perished in the sanctuary at Atapaka. Keeping in view the past experiences, we are making efforts to explain the situation to the district officials,” he says.

No fishing activity
“Kolleru is the safest place for the pelicans and other migratory birds. Painted storks, grey herons, black-tailed godwits, stilts and others are scattered in the lake and in nearby villages now. The government should take measures to maintain the water level and protect them,” said Mungara Durgaiah, a local resident. However, some farmers have shifted their cattle to nearby villages in the delta area due to shortage of water. “As Kolleru has dried up completely, there is no fishing activity. Boating is not possible and we depend on manual labour. Even though we gave a representation to MLA Chintamaneni Prabhakar, no action has been taken,” said Durgaiah.

Operation Kolleru proves a bane
With a view to restoring the past glory for Kolleru lake, government had taken up ‘Operation Kolleru’ on the Krishna and West Godavari district borders in 2006. But, the restoration of the lake has become a curse for the island villagers, as several people migrated to urban areas. After demolition of the fish tanks, thousands of villagers were rendered jobless and shifted to Bhimavaram, Eluru, Gudivada, Akiveedu and other towns.

Kolleru no more a cosy home for birds
Many birds are migrating to the nearby tanks, fields in search of food
Many villages of fisherfolk and more than 50 other villages in West Godavari and Krishna districts are likely to suffer as the lake has dried up at the beginning of the summer season
All that one can see now are parched fields, small pools and cattle and birds searching for food in the largest freshwater lake in the country. Bird lovers are worried about the drought-like situation as many species are flying off to the nearby water bodies in search of food

Fish, bird species under threat
The lake that was formed due to the coalescence of the deltaic deposits of Krishna and Godavari rivers was later cut off from the sea. At its prime the inter-delta lake rose to contour 10+ during the monsoon and shrank to contour 3+ in the summer
The problem arises as the size of the lake changes seasonally
Some hundreds of species of birds are nesting in Atapaka. Colourful birds such as painted storks, grey pelicans, large whistling teals, common teals, black tailed godwits, Northern pintails, Stilts and many water birds roost in the lake and they depend on the fish in Kolleru

Now we are on Telegram too. Follow us for updates
TAGS
Kolleru Lake