Despite passage of almost four years, ad hoc arrangements are sill continuing including excess drawls of water by Andhra Pradesh.

HYDERABAD: Irrigation Minister T Harish Rao has requested Union Water Resources Minister Nitin Gadkari to direct the Krishna River Management Board (KRMB) to take corrective measures in supplying water to successor states of AP and Telangana. In a letter to Gadkari, Harish Rao said that the functioning of KRMB, constituted under the AP Reorganisation Act, 2014, was ineffective. “The main task of the KRMB is to regulate the supply of water to the successor states of Telangana and AP, with regard to awards granted by the Tribunals. In this connection, I am constrained to state that the KRMB is not able to discharge its functions in an effective manner,” Harish Rao said. 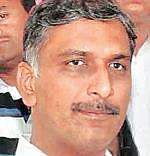 Although the current water year had commenced from June 1, 2018, KRMB had not yet regulated to supply the available water from the common projects between the two successor states. “The meetings of the Board were neither held at periodic intervals nor decisive. The last meeting of KRMB was held on June 6 and so far no effective follow-up action has been taken by the Board.

Despite the passage of almost four years, ad hoc arrangements are still continuing including excess drawls of water by Andhra Pradesh. This situation is persisting for want of any effective telemetric arrangements,” Harish Rao explained.“I request you to direct the KRMB to take effective corrective measures,” Harish Rao told Gadkari in the letter.

Now we are on Telegram too. Follow us for updates
TAGS
T Harish Nitin Gadkari Krishna River Board