Explaining the devastation caused by Titli, which made landfall near Palasa in Srikakulam district on October 10, he said extensive damage was caused due to gales gusting up to 130 kmph.

In a letter to Union Home Minister Rajnath Singh, which was handed over to him by a delegation of ministers and MPs from the State at Gannavaram Airport on Tuesday evening, Naidu said the State government had already spent Rs 500 crore on relief operations so far.

Explaining the devastation caused by Titli, which made landfall near Palasa in Srikakulam district on October 10, he said extensive damage was caused due to gales gusting up to 130 kmph.

According to him, 80 minor irrigation sources and canal system and flood banks of Vamsadhara project were also damaged. As many as 30,061 houses, 25 PHCs, roads and street lights in a considerable number were damaged in 11 mandals

“I have already requested the Prime Minister to release an interim relief of Rs 1,200 crore. The request was sent to the Union Home Secretary on October 14,” Naidu said. He observed that though more than two lakh families are in severe distress, no one from the Centre has visited the cyclone-affected areas so far. He requested a  high-level delegation to be sent to the State for taking stock of the situation.

In another letter addressed to Rajnath Singh, which was also handed over to him by the delegation of ministers and MPs, the CM sought action with regard to implementation of the AP Reorganisation Act and the assurances and promises made by the Centre to the State.  In the letter, he observed that though 14 assurances are mentioned in the main sections of the Act and 18 in the XIII schedule, not even a single one was fully implemented in the last four-and-a-half years.

In the nine-page letter, Naidu explained that he made a number of representations to the PM and other Union Ministers for implementation of the Act. “I had visited New Delhi 29 times for the purpose,” he said. 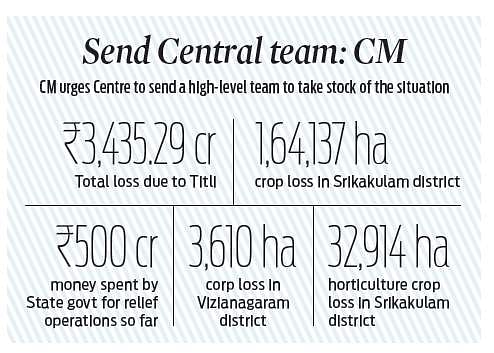 Now we are on Telegram too. Follow us for updates
TAGS
Chandrababu Naidu Rajnath Singh Srikakulam district Cyclone Titli