The website has a new and fresh look and now donors can make online contributions to the CM Relief Fund by clicking the donate online option on the website.

The website has a new and fresh look and now donors can make online contributions to the CM Relief Fund by clicking the donate online option on the website. Various features such as internet banking, mobile wallets and Unified payments interface (UPI) and QR code  have been added to the site. The donors will also receive an online appreciation certificate for their contribution from the Office of Special Chief Secretary, CMRF. There are features such as print receipt for every transaction.

The website also provides an overview of the details of restoration works currently being taken up in Srikakulam district. Many images showing the intensity of the calamity have been uploaded on the website.

As soon as the disaster struck the coastal districts, the State government has taken up relief efforts in an unprecedented scale,  mobilising all resources and entire State machinery to Srikakulam. Around 35 IAS officers, 107 deputy collectors and many line department personnel from around the State are in the ground zero.

Energy Minister K Kala Venkata Rao, who is monitoring the power supply restoration and other relief measures in the district, said the power supply has been restored in 1,392 out of 1,808 affected-villages.
He said additional personnel were deployed to the district from across the State and other States. Around 10,000 workers are engaged in power restoration works. More than 90 per cent of the engineers of the Energy department have been deployed in the district, he added. According to him, higher officials of the department including principal secretary (energy ) Ajay Jain, TRANSCO CMD K Vijayanand, Energy department advisor K Ranganatham and CMDs of both APEPDCL and APSPDCL are camping in the district. The 10,000 plus workers and the officials engaged in power restoration works have not even returned to their homes for Dasara. “They are working round the clock to restore normalcy,” Rao said. 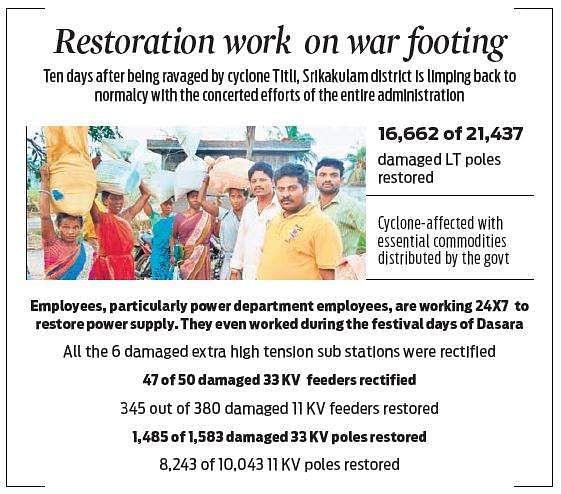 Now we are on Telegram too. Follow us for updates
TAGS
CMRF online donations Chief Minister’s Relief Fund