Among top 1,000, less than 100 give options; delay in counselling blamed for poor show

VIJAYAWADA: The Eamcet (Engineering, Agriculture and Medical Common Entrance Test) counselling evokes poor response from aspirants with less than 100 candidates who secured ranks below 1,000 in AP Eamcet 2019 giving web options for admission into colleges in the State.

As against 1.32 lakh qualified candidates, only 60,000 have exercised web options for the first phase of counselling this year.Though officials state that majority of the students are opting for seats in private and deemed universities, they admit that the delay in counselling is also played a part in the poor response from the engineering aspirants. The Eamcet counselling this year was postponed a number of times due to delay in finalisation of fee and fee reimbursement and release of Intermediate results in neighbouring Telangana.

This year, though 1,32,953 candidates qualified, only 68,134 paid processing fee during certificate verification and only 64,369 exercised web options. According to officials, nearly 50 per cent of the candidates who secured ranks below 5,000 have turned away from State colleges.

Speaking to TNIE, A Babu, convenor of AP Eamcet, said, “Less than 100 students among the top 1,000 ranks have exercised the web options. Usually, the toppers go for Central institutions such as IIT, IIIT, NIT and deemed and private universities. Due to this, many students who secured good ranks skipped the AP Eamcet counselling.”

Speaking to TNIE, S Varadarajan, Secretary of AP Council of Higher Education, said, “This year due to the delay in counselling, a majority of students opt for deemed universities and colleges in other States. The second phase of counselling will start from August 9 and we expect that a few more seats will be filled.”

This year, the Admission and Fee Regulatory Committee (AFRC) had permitted the colleges to enhance the fee by around 10 per cent. The last time the AFRC enhanced the fee was in 2016 and it was valid up to 2019. However, the State government didn’t give nod to the enhanced fee structure and asked the private colleges to continue the old one. The colleges opposed this and approached the High Court. The State government will filing its counter affidavit on August 5. With all this, the counselling has been delayed.

According to a Government Order (GO MS 39), 10 per cent EWS (Economically Weaker Sections) quota will be filled from second phase of counselling.

The candidates who are seeking admission under the EWS quota have to obtain a certificate from the tahsildar. Candidates have to update the EWS certificate online through the website https://apeamcet.nic.in by August 8. 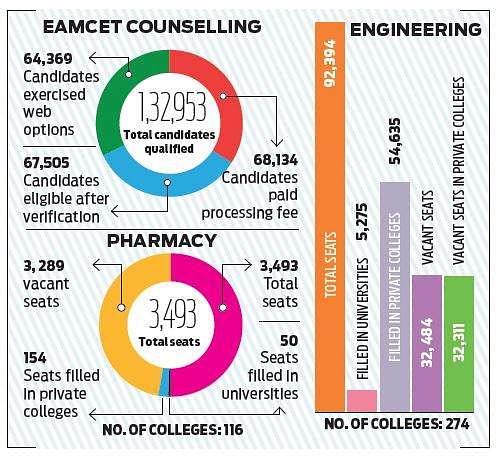 Now we are on Telegram too. Follow us for updates
TAGS
Andhra Pradesh engineering seats Eamcet