The State government’s argument is that the PPA did not explicitly tell it to drop its idea.

VIJAYAWADA: Even as the Polavaram Project Authority (PPA) and Union Water Resources Minister Gajendra Singh Shekhawat cautioned the State government that going for reverse tendering would escalate the project cost and delay its execution, the Water Resources department is all set to float fresh tenders for the balance works. The department has decided to club the balance irrigation works and hydel power project into a single package and invite bids on Saturday.

“If all goes as planned, we will invite fresh tenders for the balance works of Polavaram irrigation component and hydel power plant by Saturday. We are going for reverse tendering,” a senior official told TNIE. The tender would have worked to the tune of Rs 5,000 crore, the official added. The new contractor is expected to be picked by the end of September and the State plans to resume the project works by November, once the flooding season ends.

On Tuesday, the PPA had advised the State government to reconsider its decision to invite fresh tenders. PPA sources explained that there would be 30 per cent to 35 per cent escalation in the cost if a new contractor is engaged, besides delaying the execution of works.

The State government’s argument is that the PPA did not explicitly tell it to drop its idea. “We have informed the PPA about our decision and explained why we were doing so. It did not give a go-ahead, but it did not ask us not to go for reverse tendering as well. It just cautioned us about the likely increase in the prices. So, we are going ahead with the State government’s decision,” a top-ranking official observed.

For the record, a similar situation was witnessed in January 2018, when the previous government terminated Transstroy Ltd as the major contractor and invite tenders to engage another firm. At that time, the PPA did not agree with the idea. Neither did the Union Ministry of Water Resources. Subsequently, the State, with the Centre’s intervention and consent, engaged Navayuga Engineering Company Ltd (NECL) without floating any tenders.

When pointed out the same, the official recalled, “Back then, the PPA wasn’t informed. Hence, the State was directed not to go for fresh tenders. Now, we have intimated the PPA, to which we are answerable to.”
However, PPA sources maintained that the authority clearly informed the State that it was against re-tendering. “We told the officials that we don’t support the State’s idea as it would lead to cost escalation. The earlier project cost was based on 2014-15 rates. Now, the fresh tenders would be based on 2019-20 rates, which have risen by 30-40 per cent,” sources in the PPA explained.

Asked if the government was sure of getting contractors to execute the project for costs lesser than the contracts awarded earlier, a Water Resources department official said, “We will have to see. We hope it will work out.”

The State had served termination notices to NECL and Bekem Infra Projects Private Limited on July 29 and gave it 15 days to settle the financial aspects. Union Jal Shakti Minister Ganjendra Singh Shekhawat, in Parliament, had termed the State’s move unfortunate and expressed concern over the likely increase in costs.In reply to the notices, NECL had sought some compensation, which the officials were examining. 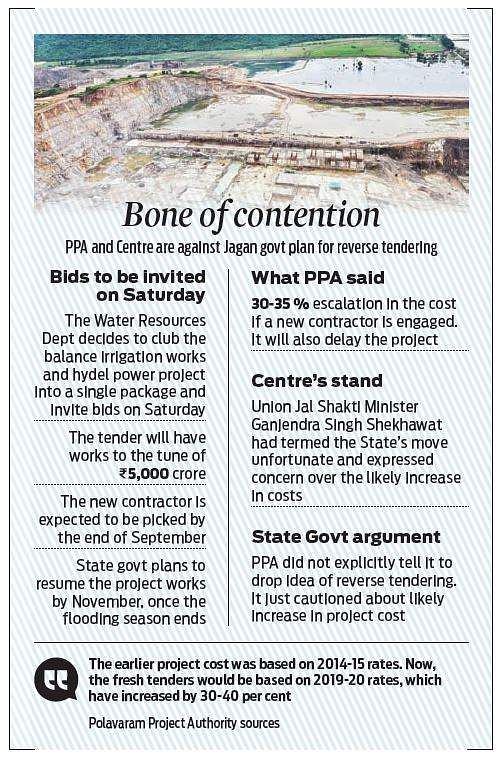