For the first two weeks of August, more than 150 villages in the agency areas and river-islets of both districts, were inundated and cut off from rest of the world

VIJAYAWADA: Rising water levels in the Godavari at Polavaram project on Thursday, has yet again become a cause of worry for the people of several villages located upstream of the project in both West and East Godavari districts.

For the first two weeks of August, more than 150 villages in the agency areas and Lanka villages (river-islets) of both the districts, were inundated and cut off from the rest of the world. Now, at a time when those villages are limping back to normalcy, reports of increasing water-levels once again is making them wary.

With heavy rains in the catchment areas of Pranahita, the largest tributary of the Godavari river, water inflow has increased substantially. “We are expecting some 6 to 7 lakh cusecs of inflows by tomorrow morning or evening at Dowleswaram Barrage. At present, water levels at Polavaram Project upstream of Dowleswaram, are at around 23 metres and might increase to 25-26 metres. The situation is likely to continue for the next 24 to 36 hours,” Irrigation department executive engineer, Mohan Rao told TNIE.

At the moment, villages along the course of the river, downstream of Dowleswaram Barrage in Rajamahendravaram are unlikely to get flooded. Though no flood warning has been issued in Rajamahendravaram and other flood-prone areas, official machinery is on high alert and steps are being taken to tackle any emergency.

According to reports, water levels in Krishna, upstream of Srisailam is decreasing. However, the river has swollen enormously, downstream of Nagarjuna Sagar, with large volumes of floodwater being discharged. At around 7 pm on Thursday, water discharge from Nagarjuna Sagar was at around 7.34 lakh cusecs and inflows at 8.78 lakh cusecs.

All low lying areas in Vijayawada and other places downstream of Prakasam Barrage have been put on high alert. The Guntur district administration has also initiated similar precautionary measures with many people being evacuated. from low lying areas. Meanwhile, water outflow from Tungabhadra and Jurala into Prakasam Barrage has decreased and the irrigation department officials expect the situation to return to normalcy .Food warnings issued in Kurnool city and villages along the course of Tungabhadra have been withdrawn. 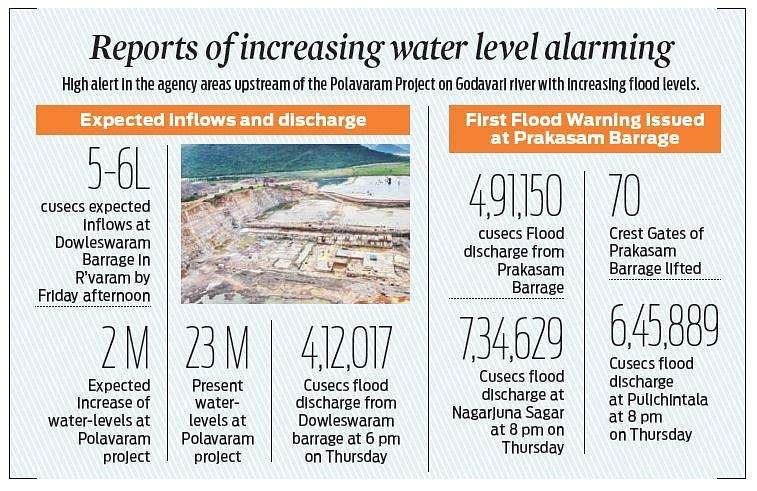