Parties urged not to politicise issue, officials told to take prior permission to use drones

VIJAYAWADA: Director General of Police (DGP) D Gautam Sawang on Monday clarified that drones were used in the vicinity of Prakasam Barrage (near the residence of TDP chief N Chandrababu Naidu) by the Irrigation department officials only to monitor the intensity of floods and not for any other purpose.

Speaking to mediapersons here, the DGP said that the communication gap between local police and the Irrigation department officials led to confusion among TDP leaders.  Dismissing the conspiracy theory that a plot was hatched to harm Naidu, the DGP said, “There is no conspiracy behind the drone incident on August 16. As a part of their duty, Irrigation officials recorded the visuals using a drone camera to estimate the intensity of the flood in Krishna river.” 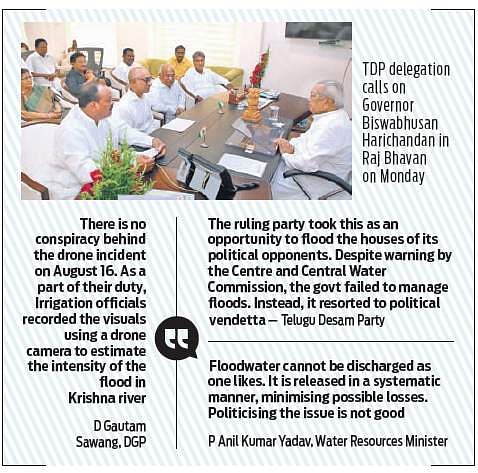 Sawang also requested both the ruling and opposition party leaders not to politicise the issue and said hereafter, officials of irrigation department or any other department have to obtain prior permission from the local police before operating drone camera in the respective areas. The DGP emphasised that permission of police is must for operating drones even for film shooting.

On August 16, two youths were apprehended by TDP leaders while they were filming near Naidu’s rented residence on the banks of River Krishna. Later, they were handed over to the police. Meanwhile, claiming that the State government has miserably failed in flood management and providing relief measures to flood victims, a delegation of TDP leaders called on Governor Biswabhusan Harichandan at the Raj Bhavan on Monday and submitted a memorandum urging him to issue directions to the State government to take up relief works.

Stating that the failure to manage floodwater released from Srisailam, Nagarjunasagar and Pulichintala projects has compounded the problem, the TDP leaders alleged that despite knowing the situation in neighbouring States, the State government failed to initiate needed action. “The ruling party took this as an opportunity to flood the houses of its political opponents on the banks of the River Krishna upstream Prakasam Barrage.

It later released floodwater in large volumes downstream, resulting in floods,” they said and added authorities were more interested in using drone cameras near the residence of Naidu than taking rehabilitation and relief measures. Emerging out of the Raj Bhavan, TDP leaders including K Atchannaidu, Gorantla Butchaiah Chowdary and others held the government responsible for the floods.
Taking serious exception to TDP leaders’ allegations of “man-made floods”, Water Resources Minister P Anil Kumar Yadav reiterated that flood in the River Krishna was properly managed as per the laid down guidelines.

Addressing the media persons in the Secretariat, he said floodwater was discharged from various projects in a systematic manner with coordination between various departments. “Floodwater cannot be discharged as one likes. It is released in a systematic manner,  minimising possible losses. During floods, some houses and fields will get submerged. It’s common. Politicising the issue is not good,” he said.

Anil Kumar said if they had really intended to be vindictive, flood banks of Krishna would have flooded. Every effort was made to ensure flood bank area of Krishna upstream Prakasam Barrage was not flooded, he said. The minister said those criticising the flood management for political mileage seems to have no knowledge of irrigation. “From August 9, floodwater was being released from Srisailam and Nagarjuna Sagar water was released since August 12. For six days, water was discharged at 8 lakh cusecs down Srisailam. To minimise the impact, every measure was taken,” he said.