Vishwa Hindu Parishad (VHP) central general secretary Milind Parande appealed to the State government to sack non-Hindus from their posts at various temples across the State.

VIJAYAWADA:  Vishwa Hindu Parishad (VHP) central general secretary Milind Parande appealed to the State government to sack non-Hindus from their posts at various temples across the State. Addressing a press conference here on Wednesday, Parande said that 17 staff belonging to non-Hindu communities were working in the renowned Jyotirlinga Sri Mallikarjuna Temple at Srisailam. Of the 17, three are Muslims and remaining 14 are Christians. 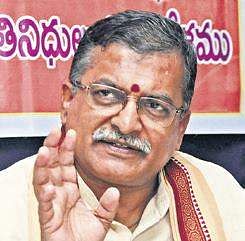 He appealed to the endowments department to take necessary steps and sack non-Hindus from the posts that they hold at various temples across the State to protect the sanctity of the worship places. The VHP general secretary further said that the State had decided to pay a salary of Rs 5,000 per month to Christain pastors, Rs 10,000 to the mullahs in mosques and Rs 5,000 to mouzams by violating Article 27 of the Constitution of India.

“How can the government use taxpayers’ money to provide salaries to the pastors and mouzams? The missionary institutions and the Wakf boards have enough funds to pay their salaries,” he stated. Commenting on the government’s plan to acquire endowment land for facilitating houses for the poor and needy, Parande said, “Why can’t the State government acquire land owned by the Christian Missionaries, lease of which given by the British Court expired in 1994? Apart from that, the government should also consider and acquire properties of the Wakf board for the purpose of distributing these to the needy,” he said.

He said that the action was in contravention of the 2006 High Court and Supreme Court judgement and against the wishes of the donors to the temples in the Hindu society. He added that a memorandum in this regard was given to Governor Biswabhushan Harichandan recently and the government should roll back its decision against Hindus.