While the Bureau of Energy Efficiency urged to provide grant-in-aid for implementing pilot project, 80 stations in the state will now charge cars of governmentt departments.

VIJAYAWADA: The Bureau of Energy Efficiency (BEE), an agency under the Union Ministry of Power, has asked the State government to focus on creating charging infrastructure for electric vehicles, which will be promoted on a massive scale in the next 5 to 10 years. In response, the Andhra Pradesh State Energy Conservation Mission (APSECM) is planning  a pilot project to set up charging stations at suitable locations, which are being identified.

According to a statement from APSECM on Sunday, it requested the BEE, which has recently written letters to various State governments, including Andhra Pradesh, explaining the guidelines and standards for faster adoption of e-vehicles and expediting the creation of charging infrastructure, to provide grant-in-aid for implementing the pilot project.

According to APSECM, there are around 80 charging stations, established by Energy Efficiency Services Ltd (EESL), in various cities across the State. These were set up at the Secretariat and various government offices to charge 300 electric cars being used by the respective departments.

According to a statement, BEE director general Abhay Bhakre explained that since the latest guidelines made setting up of public charging stations a de-licenced activity, any individual or entity can set up charging stations, adhering to the norms.

The BEE DG also said that the Union Ministry of Power had taken innovative decisions to take forward the e-vehicle movement in the country by making setting up of public charging stations a de-licenced activity.

"The government will permit any individual or entity to set up charging stations. Any charging station can obtain electricity from any generation company through open access. Private charging at residences and offices will be permitted and distribution companies (Discoms) should give priority to provide connectivity for charging stations," he said.

Besides this, demand from electric vehicles could greatly improve lower plant load factor, which is due to lower capacity utilisation. It could help improve the utilisation factor as charging of electric vehicle users is mainly during the non-peak hours. This will improve the financial condition of power utilities too,  Abhay Bhakre noted. He also observed that air pollution from vehicles in urban areas has grown at an alarming rate, posing serious health and environmental problems. To address these issues, the BEE would take up a large-scale campaign called ‘Go electric’.

For the record, the BEE has been appointed as nodal agency by the Union Ministry of Power to take up campaign in view of new proposal that aims to have electric three-wheelers operating in the country by 2023, and electric two-wheelers by 2025. 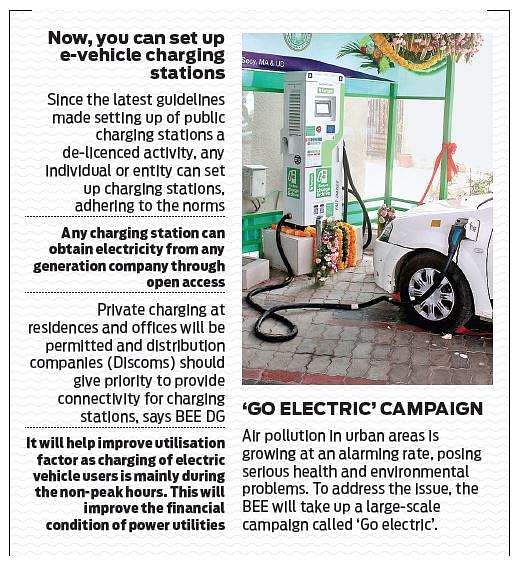