Chaotic scenes were witnessed as people, mostly women and elderly, rushed to the counters set up by the State government to sell onions at a heavily subsidised price of Rs 25 per kg.

VISAKHAPATNAM/VIJAYAWADA/KURNOOL: A stampede-like situation prevailed at rythu bazaars in Cheepurupalle and Paravathipuram towns of Vizianagaram district on Thursday morning, when people waiting at the markets since dawn to buy onions rushed in en masse after the gates were opened.

Chaotic scenes were witnessed as people, mostly women and elderly, rushed to the counters set up by the State government to sell onions at a heavily subsidised price of Rs 25 per kg. Women and children bore the brunt as the able-bodied people used force to jump the queue. However, marketing officials said normalcy was restored soon.

The price of onions breached Rs 100 a kg mark and sold at anywhere between Rs 120 and Rs 150 a kg in retail market, leading to heavy rush at government counters in rythu bazaars across the State.

Dwindling supplies at rythu bazaar subsidy counters coupled with skyrocketing price in the open market is creating restlessness among people.

Officials said there was a sharp fall in supply to rythu bazaars and onions were being exhausted in less than a couple of hours. Those who could not get onion were venting their anger, they said.

Women and elderly people were forced to stand in queue as male members go for work. Chaos at rythu bazaars is also being attributed to several people from nearby villages making a beeline at subsidy counters.

Rajeswari, a housewife from Cheepurupalle, said that the government should streamline the distribution of subsidized onion. It should engage ward volunteers to ensure door delivery of onions to prevent violent incidents at rythu bazaars, she said.

Meanwhile, at Kancharapalem in Visakhapatnam people grew restive and picked up an argument with the estate officer over the scarcity of onions. Some of them allegedly beat up the official.

According to the market officials, people started forming beelines near onion stalls since 3.30 am on Thursday. As the stock fell short for the huge crowd, people were enraged and pulled up the estate officer. Some of them allegedly attacked him.

To control the situation, the estate officer sought protection from police, who also found themselves at the receiving end of the angry crowd.  To prevent any violent incidents, barricades have been erected at onion counters at all rythu bazaars.

In Vijayawada, the price of onion in the retail market was around Rs 125 per kg. In supermarkets and online grocery shops, they sold at a princely price of Rs 150 per kg.

Responding to the prevailing situation, Marketing Minister Mopidevi Venkataraman said the government was making every effort to ensure supply of onions to the common man at a subsidized price.

Speaking to media persons in Kakinada, the minister said onion crisis was not confined to Andhra Pradesh alone, but prevailing across several States. “The situation is due to the gap between demand and supply. Due to heavy rains, onion crop in Kurnool district, which meets two-thirds of the demand in the State, suffered damage,” he explained.

In view of the steep increase in the onion price in the retail market, the State government through market intervention programme started selling the commodity at a subsidized price of Rs 25 per kilo compared to Rs 40 per kilo in Telangana, he said and added that onion was being even procured from Sholapur in Maharashtra to meet the demand.

According to him, as against the demand of 200 metric tonnes in December, the government has procured 150 metric tonnes from Kurnool and Sholapur markets. On the other hand, Central government is importing onions from Turkey, Egypt and the requirement of the State has been submitted to the Centre, the minister said.

The State government procured 24,416 quintals at Rs 14 crore, including Rs 8 crore from the Market Intervention Funds. He warned of stringent punishment to those who resort to hoarding and black marketing.

Meanwhile, the price of onion continued to soar and, on Thursday, it sold at a record high of Rs 13,010 per quintal at Kurnool Agriculture Market. It surpassed the previous high of Rs 12,860 per quintal recorded on Wednesday.

Farmers in Kurnool cultivated onions less in the current Rabi compared to the previous season (2018-19), after suffering losses. The supply of onion was more than the demand last year resulting in a low price for the produce.

Now, the situation has turned 180 degrees. Even when the farmers are harvesting onions prematurely and bringing them to the markets, the demand is not being met. With arrivals at the market steadily decreasing, it is being feared that the price might touch Rs 15,000 per quintal in the next fortnight. 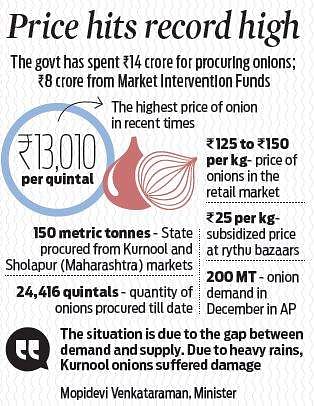 Stay up to date on all the latest Andhra Pradesh news with The New Indian Express App. Download now
(Get the news that matters from New Indian Express on WhatsApp. Click this link and hit 'Click to Subscribe'. Follow the instructions after that.)
TAGS
Onion prices Rythu bazaars Onion prices andhra pradesh India rising onion prices