Dr Prasad said that the levels of other components such as the pH value, dissolved oxygen (DO), bio-chemical oxygen demand (BOD) are well within the standard range.

VIJAYAWADA:  The latest report furnished by the Andhra Pradesh Pollution Control Board (APPCB) with respect to pollution of rivers has concluded that high-level of Coliform bacteria in the water is why the rivers are getting polluted.

“The Coliform values are high only because the domestic sewage is joining the rivers in several pockets throughout the State. All the other parameters are well within the permissible limits,” APPCB chairperson BSS Prasad said.

The board furnished the data by collecting water samples from various locations of all rivers - Godavari, Krishna, Tungabhadra, Nagavalli and Kundu- from January to October. Of these, River Krishna has the maximum Coliform bacteria presence.

Standard levels
While the standard Coliform levels for A and B category should be between 0 and 50 most probable number (MPN)/100 ml and between 50 and 500 MPN/100 ml, respectively, the values concluded by the APPCB are not at alarming levels, officials said. “The high-level of the bacteria is the only reason why the river water in Andhra Pradesh is considered to be in category C, of which the permissible range is between 500 and 5,000 MPN/100ml,” said APPCB Junior Scientific Officer Dr BV Prasad.

Sample collection
“We have collected samples from locations such as Sangameswaram and Srisailam from Kurnool, after confluence with River Musi at Vadapalli and Amaravati from Guntur, Vedadri, Prakasam Barrage, Pavitrasangamam and Hamsaladeevi from the Krishna district. The lowest value concluded was 100 MPN/100ml at Sangameswaram in September and the highest was 1,600 MPN/100ml at Hamsaladeevi in May, which has come down to 24 MPN/100 ml in October. The problem is the fluctuation of Coliform levels, which are always recorded to be high,” BSS Prasad said.

Permissible range
Dr Prasad said that the levels of other components such as the pH value, dissolved oxygen (DO), bio-chemical oxygen demand (BOD) are well within the standard range. The highest pH value measured in River Krishna was 8.0, while its permissible range is between 6.0 and 8.5. As per standards, the DO value should not be less than 6 mg/L and not more than 8.5 mg/L and was recorded to be within the range at all stretches of all rivers.

STPs the only solution
The board has concluded that establishing Sewage Treatment Plants (STPs), along with undertaking conventional treatments such as disinfecting the water, adding chlorine to the water before supplying it are sufficient measures to improve the water quality in the State. 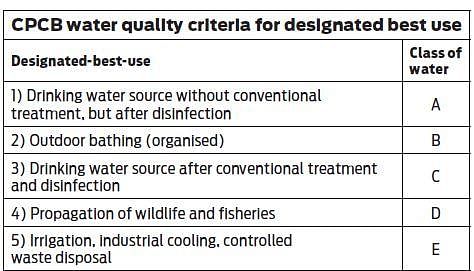