RAJAMAHENDRAVARAM: Due to incessant rains in the catchment areas of Rajamahendravaram rural and some parts of the district, the water level in Godavari river has increased.

The water level at Dowleswaram Barrage reached 10.70 feet on Monday night and continued to be the same on Tuesday. S Krishna Rao, Superintending Engineer, Irrigation Department told TNIE that 41,643 cusecs of surplus water was released into the river from Cotton Barrage. 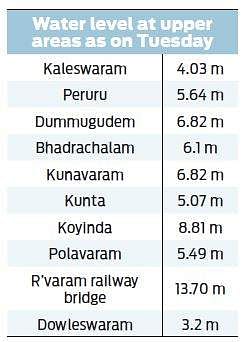 He said the situation might continue for another week as it had been persistently raining in the catchment areas.

R Mohan Rao, executive engineer at headworks division of Irrigation Department-Dowleswaram, said the situation was being constantly assessed and monitored.

“At present, the situation is stable and has not reached an alarming stage. The Godavari river water is not flowing above the danger mark,” he added.  “However, we have alerted the officials and others in the lower and upper areas of Cotton Barrage,” he explained.