Prathipadu is one of the most affected mandals and locals are facing trouble to commute as the Prathipadu-Uttarakanchi road connects 15 villages.

KAKINADA: Incessant rains for the last three days have disrupted normal life in the district, leaving several villages inundated in floodwater and damaging roads between Chintoor and VR Puram mandals.

More than five mandals recorded rainfall over 80 mm, with the highest of 96 mm in Gokavaram. The total rainfall recorded in the district was 212.8 cm. 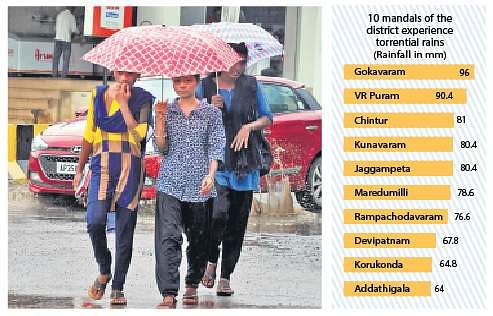 Rains have also inundated farmlands in Rowthulapudi and its nearby mandals, which are the upland areas and received the lowest rainfall of around 9 mm. Ladyfinger, banana, bottle gourd, brinjal and other horticulture crops are grown in the area.

Meanwhile, several agency mandals are under pond and canal water. Prathipadu is one of the most affected mandals and locals are facing trouble to commute as the Prathipadu-Uttarakanchi road connects 15 villages.

The water, which has stagnated in low-lying fields, has also damaged some crops. Meanwhile, locals alleged that the present situation was caused due to lack of proper infrastructure.