Jagan, during his Praja Sankalpa Yatra, announced several times that as soon as his party came to power, he would cancel the government order on bauxite mining.

VIJAYAWADA: In a significant move, Chief Minister YS Jagan Mohan Reddy on Tuesday announced cancellation of bauxite mining in Eastern Ghats of Visakhapatnam district. It’s one of the promises made by Jagan before elections as tribals vehemently opposed the previous TDP government’s move to allow bauxite mining.

Jagan, during his Praja Sankalpa Yatra, announced several times that as soon as his party came to power, he would cancel the government order on bauxite mining.  It was in November 2015, the then TDP government had issued a GO empowering Andhra Pradesh Mineral Development Corporation to mine bauxite in 1,212 hectares in 13 stretches in Visakha agency. But following a huge public outcry from tribal regions, the order was put in abeyance. Later, it became an election issue and reportedly became a rallying point for left-wing extremists.

Jagan directed police officials to ensure that tribals would not turn to Maoists and initiate measures to improve their livelihood opportunities. To instill confidence among tribals, police and officials of other departments should visit Maoist-affected areas at least once a month. “It will show tribals that government cares for them,” he said.

Jagan who made illegal sand mining in the TDP regime a major issue during his Praja Sankalpa Yatra raised the same during the conference and wanted to know what the police were doing. 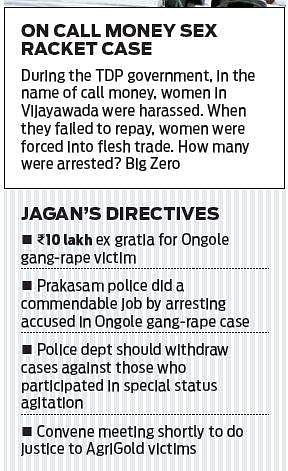 “Right in front of your eyes, right beside the former Chief Minister’s residence sand being looted, proclaines working, you see JCBs working, hundreds of lorries taking sand, dispatching sand. Everybody knows it is illegal. This does not stop here, but you see in West Godavari, a lady MRO was dragged by her hair. It was all on paper. She was stopping an MLA who was involved in sand mafia. Is this best practice? Is this number one police?” he questioned.

Citing examples of rampant illegal mining in Guntur, MLAs collecting money from theatre owners, running clubs and gambling dens, forcing people to give up their lands in the capital region, which led to 11 suicides including those of six Dalit farmers, he wondered if it was best practice. He told the officials to show they mean business and would not allow any illegal mining, illegal activity or corruption.

“Even if it is our MLA, don’t keep silent. Take action,” he told them assuring his complete support. Police officials were asked to conduct major operations in August to tackle ganja cultivation, but with a humane touch. He wanted them to find alternative livelihood to tribals engaged in ganja cultivation. The operation should be conducted in coordination between intelligence department and Greyhounds, he said.

The Chief Minister also emphasised the need for friendly policing. He said that friendly approach would solve half the problem of the people. He also called for better relations between MLAs, MPs and police department. “That does not mean wrongdoings should be overlooked,” he said and advised police officials to keep ego aside while dealing with people.

In a similar suggestion he gave IAS officers, Jagan asked IPS officers to issue acknowledgements for applications from public with a specific time-line for redressing them.At the same time, he wanted to have a third party feedback mechanism to assess the performance of the police department.