Objection to Jana Sena songs played led to tension at fair, police came to the rescue.

GUNTUR: The locals and the police engaged in a scuffle at Dharmavaram of Durgi mandal on the intervening night of Saturday and Sunday.

Some persons affiliated to other parties objected to it and demanded that it be stopped. But the Jana Sena leaders were adamant to do so, which led to the ruckus. 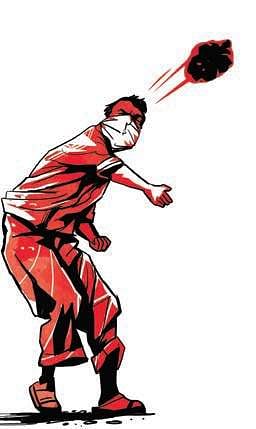 When the police reached the place to control the situation, locals pelted stones on them. Durgi SI Ramajaneyulu and home guards Ranga and Pichaiah suffered minor injuries.

The windowpane of the police vans were broken and tyres deflated.

The police were stopped in the village for some time by local women, escalating the situation.

According to the locals, the Tirunalla fair started on November 13 and will continue till November 16.

The YSRC leaders organised a social play on Thursday and the Jana Sena leaders conducted one on Saturday night, which led to violence between the locals and resulted in an attack on the police.

Gurajala Deputy Superintendent of Police (DSP) K Srihari reached the spot with additional force and brought the situation under control.

Guntur rural SP Ch Vijaya Rao directed the police to take action on the activists who pelted stones on the police and damaged police vehicles.

He said that some women obstructed three police vehicles by lying on the road when the police were trying to take the stone pelters away in police vehicles.

Vijaya Rao directed the police to identify the accused behind the disturbance and arrest them immediately. The Station House Officer was asked to take measures to check such incidents in Guntur (Rural).

The SHOs were instructed to ask the organisers to take prior permission if they desire to organise such plays during the Tirunalla in Guntur district.

Stay up to date on all the latest Andhra Pradesh news with The New Indian Express App. Download now
(Get the news that matters from New Indian Express on WhatsApp. Click this link and hit 'Click to Subscribe'. Follow the instructions after that.)
TAGS
Sri Hari Hara Bala Nagendra Swamy Jana Sena Guntur police clash