KADAPA: Kadapa district stood first in the country in the Jal Shakti Abhiyan implementation with 80.38 points. It has successfully implemented all the programmes taken up under five categories. The rankings were announced in New Delhi.

Sangareddy of Telangana came second in the country with 78.27 points while Banas Kantha district of Gujarat came third with 77.76 points.

In Andhra Pradesh, Kurnool is at 30th position, Chittoor at 49, Guntur 51, West Godavari 53, Krishna district 63, Srikakulam 64, Anantapur 67 and Prakasam 82 among the 255 districts in the country where the Jal Shakti Abhiyan was taken up. With an objective to effectively harvest each and every raindrop of water so as to recharge the groundwater table,  the Union Ministry of Water Resources launched Jal Shakti Abhiyan in 255 water-stressed districts across the country on July 1, 2019. In Andhra Pradesh, nine out of 13 districts were selected for the programme. The scheme, planned till September 15, was extended up to September 30 later.

All four Rayalaseema districts — Kadapa, Kurnool, Anantapur, and Chittoor —were among the nine districts from the State. In Kadapa, a total of 13 mandals were covered under the scheme.Under the supervision of the Special Officer from the Centre on deputation in coordination with district and State officials, several programmes were initiated in five different categories (intervention areas) -- water conservation and rainwater harvesting; renovation of traditional and other water bodies/tanks; reuse and recharge structures watershed development and intensive afforestation.

Expressing happiness over the district ranking first in the country, District Water Management  Agency (DWMA) project director P Yadhu Bhushan Reddy said district administration led by district collector C Hari Kiran, central nodal officer Suresh Kumar and staff of his department strived to bring the district’s ranking from 222 on August 5 among 255 districts to the top place. He observed that even the staff had forfeited six public holidays to reach the target and today all are proud of their efforts. 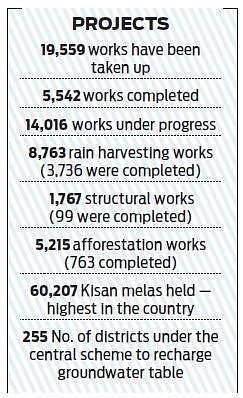 The works started showing results during the recent heavy rain and floods in the district. The water was effectively stored in minor irrigation tanks, rain harvesting pits, irrigation channels, farm ponds and soak pits.  The groundwater also has reportedly improved in places, where the levels have dipped during summer.

Kadapa DWMA with the slogan ‘Save Water - Save Life’ conducted 60,207 Kisan melas, the highest in the country. In these melas, farmers, students, and the general public have been involved to create awareness on water conservation.

Stay up to date on all the latest Andhra Pradesh news with The New Indian Express App. Download now
(Get the news that matters from New Indian Express on WhatsApp. Click this link and hit 'Click to Subscribe'. Follow the instructions after that.)
TAGS
Kadapa district Jal Shakti Abhiyan implementation Banas Kantha district Anantapur Prakasam Srikakulam Krishna Guntur