AP govt sets up committee to review Amaravati, other plans

While the terms and conditions have not been specified yet, it appears that the State is steering the narrative towards a decentralised development

HYDERABAD:  Amid growing uncertainty over the fate of Amaravati, the State government has constituted a six-member expert committee to review the developmental plans initiated so far and suggest a comprehensive strategy for all-round development of the State, including the capital. While the terms and conditions have not been specified yet, it appears that the State is steering the narrative towards a decentralised development.

According to the order issued on Friday by Municipal Administration and Urban Development Secretary J Syamala Rao, “An expert committee is appointed with members who are renowned in urban planning to take a quick review of the developmental plans initiated so far and suggest comprehensive development strategy for all-round development of the entire State including Capital...The committee shall submit its report to the government within six weeks.” 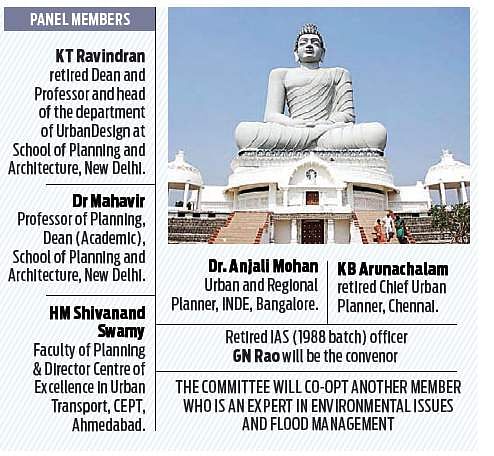 For the record, the State government had constituted an expert committee in June to review all the engineering works awarded during the previous TDP regime across all departments including in Amaravati. Chief Minister YS Jagan Mohan Reddy too alleged insider trading and dubbed the development of Amaravati a ‘Catch-22’ situation. The works have come to a grinding halt subsequently.

Following the constitution of the committee in June, Municipal Administration and Urban Development Minister Botcha Satyanarayana said that the previous government ignored the Sivaramakrishnan Committee’s recommendation against building a capital in Amaravati citing it as a flood-prone area. Hinting that his government was looking at decentralised development, the minister, on several occasions, also said a capital should not be confined to a community or a region, and that all areas should be equally developed. He also claimed that the construction cost in Amaravati was two-fold higher than in other areas.

These statements coupled with the constitution of the committee, triggered speculation that the government might drop the grand capital plans. The Friday’s orders more or less affirm that the government is preparing the ground to roll out its plan of decentralised development either by downsizing the proposed Amaravati or cancelling the projects.

“It appears that the committee is essentially formed to prepare the ground for the government to announce decentralised development, instead of a mega capital city. Otherwise, why would there be a member who is an expert in environmental and flood management at a time when the YSRC ministers alleged that the capital region was submergence-prone?” sources in the government pointed out.

Minister Botcha Satyanarayana, however, clarified that the committee was formed to provide better infrastructure and standard of living to those living in urban areas. “About 30 per cent of our population lives in urban local bodies. So, the committee will tell us how to ensure better facilities to them.Similarly, development should not just be concentrated around the capital, but all 13 districts should get equal importance,” the minister said on Friday at a workshop organised for municipal commissioners in Vijayawada.