KURNOOL: As many as 1,120 students had a narrow escape as AP Social Welfare Residential Girls’ School at Vadakandla in Allagadda and CSI Church Missionary Residential School at Yerraguntla were engulfed in floods owing to heavy rain from Sunday midnight till early hours of Monday. 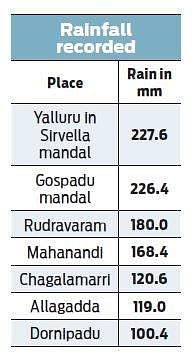 The authorities sprang into action and broke the compound wall of AP Social Welfare Residential Girls School for better access to bring in rescue vehicles. Allagadda DSP V Pothuraju said, “We spoke to the Allagadda municipal commissioner and got school buses as well as APSRTC buses to transport the children to a safe location.”

“We faced some issues as a few buses got stuck in the floods. However, all the children have been shifted and none of them sustained injuries,” he added.

Nandyal and its surrounding mandals, including Allagadda, Sirivella, Koilakuntla and Gospadu received 22 cm rainfall. The ground floor of the Kasturba Gandhi Balika Vidyalaya (KGBV) in Gospadu was flooded, while the school ground of the Sirivella KGBV was inundated. In-charge Collector Patanshetty Ravi Subash directed the RDO, MPDOs and tehsildars to be on alert. He, along with DEO S Tahera Sulthana, rushed to Allaggada and monitored the rescue operations. Officials from irrigation, disaster management, fire and rescue personnel have been deployed to provide relief to the flood-hit areas.

The officials of fire and police departments rescued three persons stuck in floodwater at Revanur in Nandyal and four others at Lingala in Koilakuntla mandal. Standing crops were damaged in several mandals. The in-charge Collector advised people not to cross rivulets. Heavy rain breached several causeways and snapped road links at over 20 places in Nandyal division.