VIJAYAWADA: Noting that the reverse rendering process for Polavaram project initiated by the YSRC government saved Rs 838 crore of the exchequer’s money, Water Resources Minister P Anil Kumar said that the national project would be completed in two years after the new contracting agency takes over the project in November. He also clarified that the height of the main dam would not be decreased as being alleged by the TDP.

Speaking to the reporters at the party office in Tadepalli on Tuesday, the minister termed Chief Minister YS Jagan Mohan Reddy’s reverse tendering idea a historic one.“We were able to save Rs 838 crore — Rs 58 crore in left canal tunnel works and Rs 780 crore in irrigation headworks and hydel power plant — through the CM’s transparent reverse tendering plan. Imagine into whose pockets this money would have gone into otherwise. We will do this for all the projects and save public money,” he said, adding that the reverse auctioning for Veligonda phase-2  would be held shortly.

Responding to the allegations made by TDP chief N Chandrababu Naidu and other Opposition MLAs, the minister alleged that the yellow brigade was slinging mud at the State government as it was worried that the last five years’ corruption would be exposed. “Let them show one major project which they awarded without excess pricing in the last three years. They alleged that reverse tendering for Polavaram would result in monetary loss and delayed benefits. We will launch the works from November and complete it in two years by simultaneously taking up rehabilitation and resettlement (R&R) works. Will the TDP and its leaders leave politics if we do so?” he sought to know.

Anil Kumar also rubbished the allegations of Naidu who claimed that the reverse tendering was done to benefit one contracting firm.“If that was the case, we wouldn’t have told Navayuga Engineering Company Ltd to participate in the bidding. Why didn’t it participate? Will the firm participate only if the works are awarded on nomination basis?” he questioned.

He clarified that the government was not going to bring down the height of Polavaram main dam at the behest of Telangana Chief Minister K Chandrasekhara Rao, as alleged by the TDP. “The dam height will be as per the approved designs,” he maintained.

The minister also lambasted former water resources minister Devineni Umamaheswara Rao for alleging that the quality of the project would be affected due to lowering of the cost. “The same company, Megha Engineering and Infrastructure Ltd (MEIL), which now bagged the project, was given projects worth Rs 20,000 crore in the TDP regime. What has changed now for the TDP to accuse that the quality of works would come down? The former minister should first vacate the premises from which he is holding press conferences. They took over irrigation department’s land at a throwaway price of Rs 1,000 a year, when the department is in rental buildings. Do they have moral ground to level charges against us?,” he wondered. 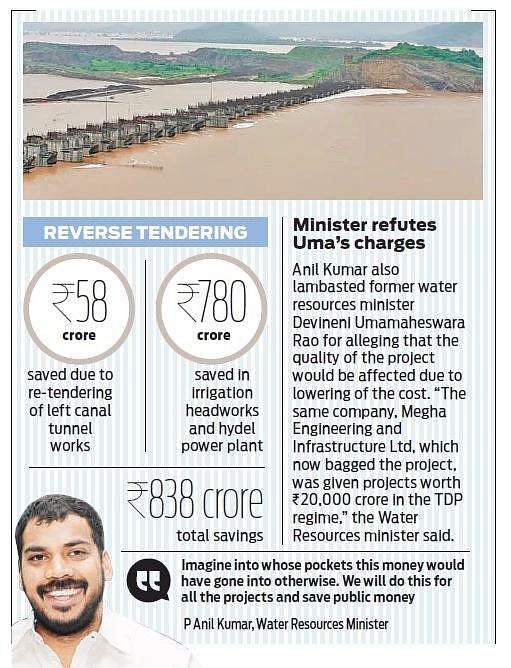