VIJAYAWADA: Citizen Driven Enforcement on Road Safety, an initiative by the Transport department to enable citizens to lodge complaints of traffic violations by taking a photograph of the incident and sending it to the Regional Transport Authority (RTA) through WhatsApp, has been receiving poor response from the public.

In all, only 105 complaints were received from across the State till September 23 through the platform launched by Transport Minister Perni Venkataramaiah on August 28. However, the Regional Transport Authority officials maintained that they started considering the complaints received from September 4 due to initial hiccups.

Of the total complaints, the officials have served notices on only 80 violators and imposed fines under Section 200 of Motor Vehicle Act, 1988, based on their violations

Speaking to TNIE, Additional Transport Commissioner (ATC) P Srinivas said the public were posting low-resolution images of the alleged violations in most cases, making it a tough task for the transport department to identify the type of offence and penalise the violators.

“Most of the complaints were related to helmet-less riding, driving while using cell phones, triple riding and number plate violations. We are also planning to launch an official Facebook page and make the platform accessible to the public so that they can inform the transport department about alleged violations.”

Briefing about the functioning of the initiative, the Additional Transport Commissioner explained: “Soon after a complaint is posted on the platform, the department acknowledges it and sends a message to the uploader, appreciating his/her efforts. Then, an e-vehicle check report (VCR) is generated automatically and a message is sent to the violator, who has to pay the fine amount online through https://aprtacitizen.epragathi.org/#!/appstatus.”

‘’We request the public to upload images in which the registration numbers are clearly visible. While capturing the photo, one should ensure that date, time and location of the captured photo are recorded, too,” he said, adding, “For good pictures, people can also use the Notecam application  on android phones if they are not familiar with their phone settings.’’ 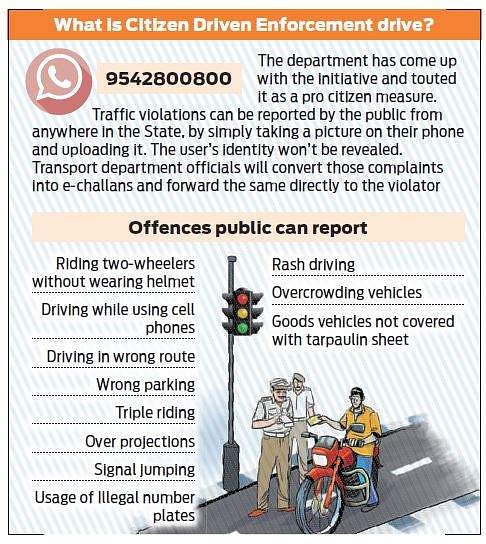