N Srinivasulu, another farmer from Addanki mandal, also has a similar story to tell about the officials of Karur Vysya Bank.

ONGOLE: Farmers in Prakasam district, who have pledged their Bengal gram stock to take a loan from banks, have accused the bank officials of insulting them for not paying EMIs for the past few months.
“They (the debt recovery agents of the bank) came to my house when I was out of the station and insulted my family members by revealing the bank loan details to my neighbours. It caused a big embarrassment for my family members. I have paid 1/3rd of my loan amount. How can they do this?” asked P Satyanarayana, a Bengal gram farmer of Korisapadu Mandal.

N Srinivasulu, another farmer from Addanki Mandal, also has a similar story to tell about the officials of Karur Vysya Bank.“They issued a notice stating that they are going to auction my Bengal gram stock, which was pledged as collateral security for a loan on October 3, 2018. This is not right. I have repaid almost 75 per cent of my loan amount and due to some financial difficulties, I was unable to pay my instalments in the last few months. Now, they have issued a notice and I don’t know what to do,” Srinivasulu lamented.
Satyanarayana and Srinivasulu are not alone. Around 600 farmers in the district are facing a similar plight. As they have not paid their EMIs for the past few months due to financial problems, the bankers — mainly State Bank of India (SBI) and Karur Vysya Bank (KYB) — have issued auction notices for around 50,000 quintals of Bengal gram stocks which belong to around 600 farmers of the district, who took loans from banks by pledging these stocks as collateral security.

Now, their loan accounts have been categorised as non-performing assets (NPAs). Debt recovery agencies are often visiting the farmers’ residences and harassing them seeking repayment of their dues. The farmers and their family members are worried because of the public humiliation they are subjected to in the process.

The Zilla Raithu Sangham (ZRS) has decided to meet the district collector on September 30 seeking government intervention to stop the bankers from initiating the auction process.As per information, around 14 to 15 lakh quintals of Bengal gram stocks have been kept in several cold storage units across the district by farmers due to absence of minimum support price for their produce. Among these, around five to six lakh quintals of Bengal gram stocks were mortgaged as collateral security to take bank loans.

SBI and KYB have issued notices to around 600 farmers stating that around 50,000 quintals of Bengal gram will be auctioned if they failed to repay the amount. ZRS leaders condemned the attitude of the bankers. 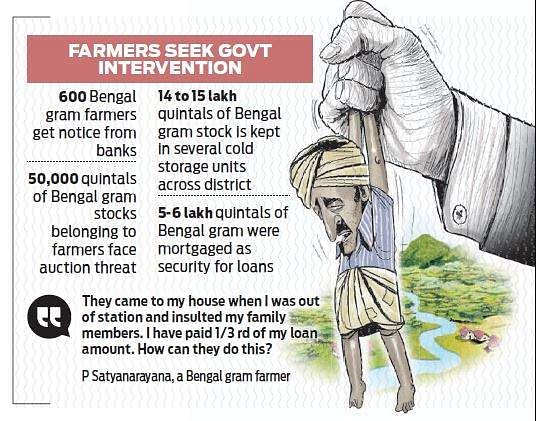