Wait for the promised medical camps as part of health impact study in the villages of Vemula mandal by UCIL continues.

KADAPA: Wait for the promised medical camps as part of health impact study in the villages of Vemula Mandal by UCIL continues. People in these villages alleged that due to contamination from the tailings pond of UCIL’s uranium processing plant several medical complications have arisen and skin disorders are one among them.

Following their visit to the place, an expert committee constituted by the Andhra Pradesh Pollution Control Board (APPCB) on September 9 and 10 in its reports submitted on September 11, has recommended that systematic environmental epidemiological studies in these villagers be conducted. However, even after 20 days, there has been no sign of experts coming to conduct epidemiological studies.

Poola Narasimhulu of KK Kottala in Vemula mandal, says before the construction of tailings pond, there were no complaints of any water contamination in the area, the medical problems were largely confined to fevers and common cold. “But now, the situation has changed, there is not a single house which is not having a person suffering from one health disorder or the other,” he claims.

For several months now, people are suffering from rashes, knee, joint pains and swellings. Though doctors gave medicine, it proved ineffective. Most importantly our women folk started having menstrual problems and there were also cases of miscarriages, he says.

Tulasi Naik, a retired CRPF jawan from Kanampalle, holds contamination from the tailings pond responsible for non-functioning of his two legs. “Pain is unbearable. My life has become a living hell,” he says. Naik, who cultivated banana, also suffered losses and attributes it to chemical contamination of soil due to tailings pond.

Sridevi of KK Kottala, says even after they stopped drinking water from the wells and borewells in the region, after finding a cream-coloured layer on top of the vessels after fetching water, there is no stopping in health disorders.

Recalling the public hearing they attended, LV Sudhakar Reddy of Mabbu Chintalapalle, said that at that time they thought uranium mines will provide them jobs and their future would be secure. “All we got is health ailments and an uncertain future,” he lamented.

They said that the impact of uranium mining and pollution from it is not limited to health disorders, even the crop yield has come down and livestock is also suffering due to contaminated water.“Several of our borewells dried up and if we dug any deeper, we are getting contaminated water,” says S Nagendra, a farmer from K Kottala, claiming it is due to uranium mining.

In its report submitted on September 11, the expert committee said there were large representations from people about incidents of skin disorders, lipomas, miscarriages and breathing issues alleging pollution from UCIL activities after 2016. The committee recommended authorities concerned to facilitate systematic environmental epidemiological studies in these villages. To establish the cause of ill effects, toxicological studies may be conducted on a priority basis.

Subsequently on September 13, the APPCB directed the UCIL to carry out health impact studies by dermatologists and radiologists due to the release of radionuclide if any to the environment and take necessary action as required.

Recommendations made by expert panel

Provision for implementation of impervious discharge channels or use of hose pipes to prevent erosion of abutments and consequent seepage
Drying and compacting the existing tailings and laying the following sequence — 1.5 mm thing compacted clay having permeability not less than 1x10 to the power of  — 9 m/s, 1.5 mm HDPE lining and a sand layer of 0.3 m thickness. The protective lining should cover all the surfaces that are exposed to the tailings
Fencing should be strengthened to secure the entire area with an adequate display of cautionary boards
Additional boreholes of adequate depth around the tailings pond, especially to the south and west of the pond to establish and monitor groundwater quality
Long term water quality monitoring strategies by reputed firms
Facilitate systematic environmental epidemiological studies in these villages. To establish the cause of ill effects, toxicological studies may be conducted 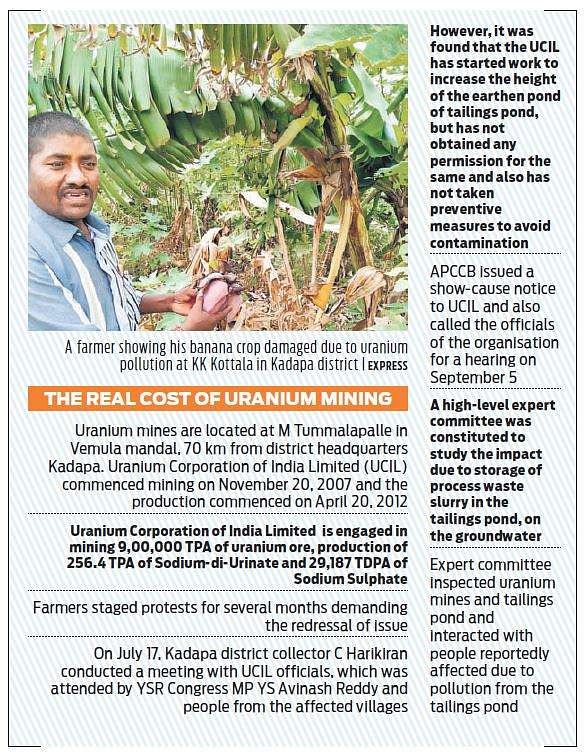