Foreigners being evacuated, but desi tourists told to wait in Andhra Pradesh

Some of these 63 have been in the State for the past six to seven months and some came to AP by March-end.

VIJAYAWADA: As many as 63 tourists and NRIs are stranded in the State due to the 21-day lockdown announced by the Centre to check the spread of coronavirus.

“Many of them are Indo-Americans, who have come to the State to meet their parents and family members. Of the 63, eight are foreign tourists (six from Kazakhstan and one each from Bulgaria and Australia), 28 are NRIs and 27 domestic tourists. Seven of them are in Anantapur, 27 in Chittoor, three in Nellore, one in Guntur, five in Krishna, nine in East Godavari and 11 in Visakhapatnam,” said Sambasiva Raju, in-charge of evacuation. 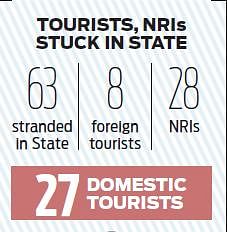 Some of these 63 have been in the State for the past six to seven months and some came to AP by March-end.  “Many foreigners visit India for travelling across the country and spend more than half of the year here. They go back around February when their new academic semesters begin. On the other hand, the non-resident Indians (NRIs) come to meet their family members during the season due to the extreme winter abroad. Also, its academic vacation time in India,” Raju pointed out. The State government is making arrangements for the evacuation of foreigners as per the instruction of the Centre.

Raju said that special passes have been made available for them to travel. “We are evacuating only those tourists whose information is provided by the Centre. The tourists can contact the Union Ministry of Tourism through its portal and can send the details of their location and personal details like name, phone number and where they want to go. The Centre then forwards the information to respective States, which make arrangements for evacuation,” Raju explained. The Centre on March 31 launched a web portal ‘Stranded in India’, which can be accessed through the ‘Incredible India’ website.

For instance, suppose a tourist wants to go to the US and has to board his flight from Mumbai, we drop that person at Mumbai airport from Hyderabad airport,” he said. “Also, before they start their journey back home, they are thoroughly checked by the doctors and other medical staff. Only after ensuring that their health condition is stable, we allow them to travel,” added Raju. However, the domestic tourists, who wish to travel to their home States, are not allowed to travel even if the respective State governments are ready to make all arrangements as the borders are sealed. Earlier in March, the State evacuated 14 Indo-Americans, who took a flight to the US from Mumbai. “I am thankful to the Central and State governments for making arrangements to help us reach our home. It is a difficult task for them and so I request other stranded persons to wait  and give some time to the authorities to take necessary measures,” said Sunitha, who was among the 14.

Now we are on Telegram too. Follow us for updates
TAGS
lockdown Andhra Pradesh tourists