VIJAYAWADA: Tests per million population in Andhra Pradesh has reached 50,664, highest among all other states. As per a media bulletin issued by the State Command Control Room (Health) on Thursday evening, Andhra Pradesh is the only state to have conducted more than 50,000 tests per million population, followed by Assam (44,966) and Tamil Nadu (44,572).

Meanwhile, the state’s Covid-19 tally touched 2,64,141 with another 9,996 persons testing positive in the 24 hours ending Thursday 9 am. While another 82 casualties pushed the toll to 2,378, the overall recoveries stood at 1,70,924 after 9,499 more patients were discharged from hospitals across the state, according to the bulletin. The state has 90,840 active cases.

District-wise, East Godavari, yet again, recorded most fresh infections (1,504) even as it continued to top the list of overall cases of 37,146, of which 15,872 were active. The lowest number of new cases of 330 was reported from Krishna district. 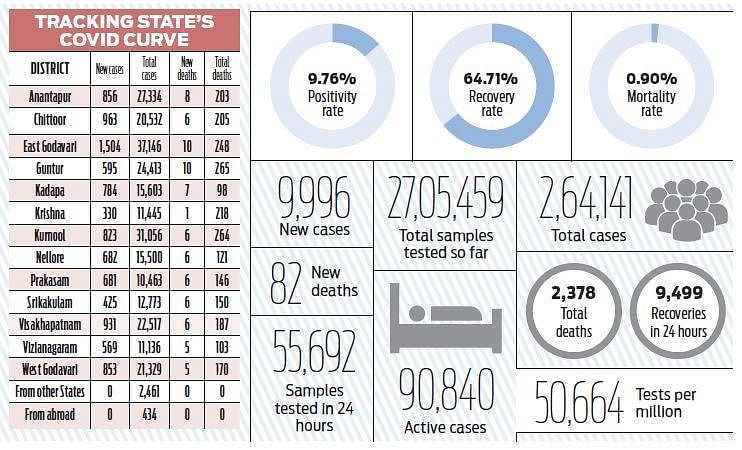 Among the 82 casualties in the last 24 hours, East Godavari and Guntur districts accounted for ten deaths each, Visakhapatnam and Srikakulam six each, Vizianagaram and West Godavari five each, and Krishna one.

Six districts have reported more than 200 casualties each with Guntur leading the table by registering a total of 265 Covid deaths.