Promotion of eggs as a rich source of nutrition and an immunity booster is helping COVID-hit farms recover faster.

VIJAYAWADA: Poultry farmers in Andhra Pradesh, who suffered heavy losses due to the COVID-19 crisis, are now hoping for revival of their fortune as eggs are being promoted as a rich source of nutrition and one of the best immunity boosters.

COVID-19 crisis, that started in March this year, has become the last straw that broke the back of the camel for the poultry sector, which has been facing slump due to steep increase in the prices of feed, especially maize and soybean. The number of birds in the poultry farms in the State has reduced to around three crore from five crore and several people have left the business.

"Nearly 30 per cent of the birds were either sold or culled, unable to bear the losses during the initial phases of the lockdown, when the adverse rumours hit the poultry farms hard and chicken was sold out at throwaway prices. Even the cost of egg fell down to Rs  1-1.5 from Rs  4.5 to Rs  5 per piece. Several poultry farmers were ready to give up at that point," said KV Mukunada Reddy, chairman of NECC (National Egg Coordination Committee), East Godavari.

East Godavari district along with West Godavari and Krishna has major share in egg production of the State, followed by Visakhapatnam, two other north coastal districts and Rayalaseema districts.

As the domestic consumption of egg in the State is between 25-30 per cent only, poultry farmers are depending  more on exports. "Majority of the exports are to three States —  West Bengal, Odisha and Assam — with West Bengal alone accounting for 75 per cent of the exports," said K Sateesh Reddy, market surveyor of East Godavari Zone, NECC.

"Today, we are witnessing improvement in market condition, which can be attributed to two factors — increasing awareness that eggs are a rich source of nutrition that can improve immunity levels, which increased its demand, and second factor being stabilisation of poultry feed price," P Subba Reddy, general secretary of Andhra Pradesh Poultry Federation, told TNIE.

Before lockdown, the cost of the egg fluctuated between Rs  4 to Rs  5 per egg and during lockdown, it drastically fell and at one point hit the bottom low of nearly Rs 1 per piece.  However, after extensive awareness campaigns by the poultry sector, government and the recommendation of the Indian Council of Medical Research (ICMR) and other health organisations that egg is an immunity booster, the situation has started making a turnaround.

During May, the price of egg fluctuated between Rs 2.70 and Rs  3.20 per piece and in June it improved marginally and from July 15 onwards, with increasing demand and decreased production, the price of the egg increased and today it is around Rs  4.30 per piece.

"Apart from awareness among people, reduction in the price and subsequent stabilisation of feed price also helped the farmers. Feed price, which increased from Rs 17 to Rs 27 per kg, has reduced again," Subba Reddy explained.

Though the farmers expected to see the price of an egg cross Rs 5 considering the increasing demand, the uncertain market due to increasing number of COVID cases and the consumers’ reluctance to go to the market out of fear, saw the price standing below Rs 5.

One more important factor that helped the poultry farmers since July was the government doubled the supply of eggs to the schoolchildren, though schools were closed. The eggs along with other food material is being sent to the homes of schoolchildren.

From September, with the launch of the Sampoorna Poshana scheme, under which eggs will be supplied to pregnant women, lactating women and children in the 3-6 age group, poultry farmers expect that the situation will improve further.

"Local market situation has improved and the export market too is expected to be improved in the coming days. Feed costs have stabilised and if the present situation continues for another 7-8 months, losses of poultry farmers will be at manageable levels and thereafter we can expect the revival of fortunes," said  KV Mukunada Reddy. 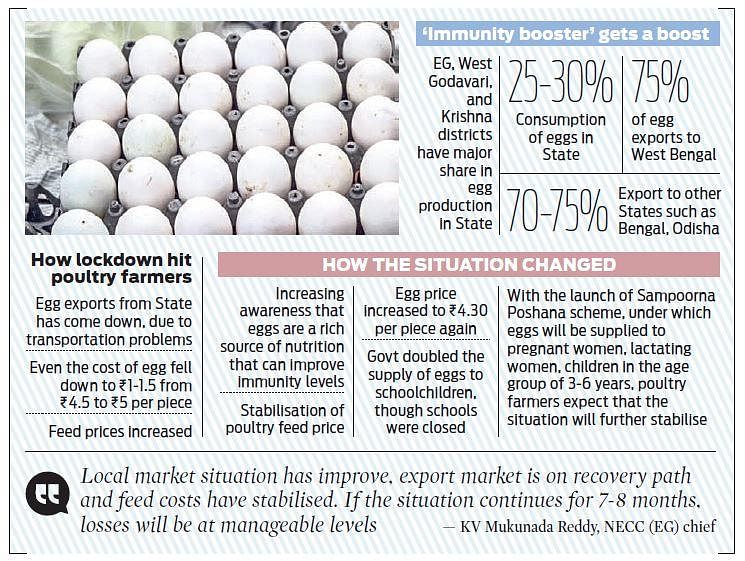 Now we are on Telegram too. Follow us for updates
TAGS
eggs Andhra Pradesh lockdown COVID19 AP poultry farmers