Quarry owners in Prakasam district say if situation does not improve by Feb 20, then they will face a tough time.

VIJAYAWADA: Owners of granite quarries in Prakasam district, from where a majority of the granite exports from the State to China take place, are worried as coronavirus outbreak in the neighbouring country is set to push the industry into a slump, if the normalcy does not get restored in a fortnight.

Though coronavirus cases were first reported in China a month ago, it has little impact on the granite exports from the State so far as the period (January 15 - February 15) coincided with the month-long holiday usually taken by the Chinese, marking the Chinese new year.

The advanced bookings made for the period are still under process and will conclude by around February 20. “If the situation does not improve by that time, then we will face a tough time,” says Galaxy Granite Quarries Owners Association general secretary MA Azeem.

Usually, 150 to 200 representatives from the Chinese granite manufacturers visit the granite quarries in Prakasam district every month on an average to place their orders. Their visit is mandatory, as the orders are placed only after the physical inspection of the granite in the quarries. The Chinese traders normally stay up to 10 days depending on the volume of the orders they intend to place.

Around 50 major companies in China import granite (in raw form) from Prakasam district, which is famous for its Chimakurthy Galaxy granite, and export the finished products across the globe. These companies send their representatives who are well versed in the identification of granites to place their orders for optimum raw granite. About 80 per cent of the granite exports from Prakasam district go to China.

The last time these traders came to Prakasam district was on January 15, before taking nearly one month holiday. Before that, orders were placed more than usual in advance and the shipments of those orders will be completed by February 20.

Now, with India imposing a ban on visas for Chinese in view of the coronavirus outbreak, which has claimed scores of lives and infected even more people, the traders from China are not able to come till normalcy gets restored.

Azeem says that if the traders from China do not visit the granite quarries to place their orders, production has to be gradually decreased, which will have a cascading effect. “First we have to bring down the number of shifts from three to two and then to one in quarries to phase out production, albeit temporarily. Though it is not perishable goods, we cannot take the risk of quarrying more, as there is no place to store,” he said.

Around 45,000 to 50,000 people are indirectly dependent on granite quarries for their livelihood, like transporters, MSME units who take care of domestic consumption of granite, supplies, etc.

In Prakasam district, the average monthly production of granite is around 50,000 cubic meters, of which 25,000 to 30,000 cubic meters get exported, with a major chunk of them exported to China and the rest to East Asian countries. These granite quarries fetch the State government around Rs 250 crore revenue a year in the form of royalties.

Apart from Prakasam district, granite is also quarried in Srikakulam, Chittoor, Visakhapatnam and Anantapur districts. Blue granite from Srikakulam is also much sought after by the exporters and the coronavirus outbreak is also likely to impact the granite production in the north Andhra region.
“All we are hoping and praying is that the situation gets restored to normalcy at the earliest, so no one has to suffer,” said another granite quarry owner. 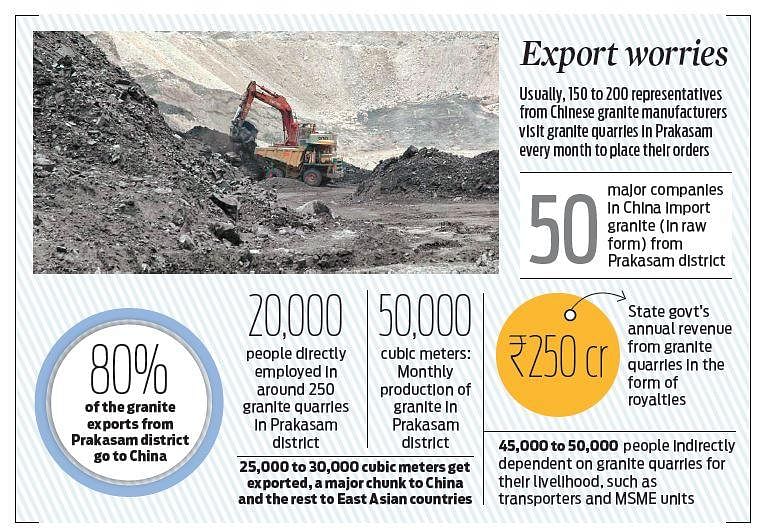 BJP has become medium to bring transformation in country: Nadda to workers