Samples to be colour-coded to avoid delay

They will be categorised into four to prioritise testing process based on urgency and sent to the lab within 12 hours.

VIJAYAWADA: OBSERVING that there was a gap between testing and updating results, Special Chief Secretary (health) KS Jawahar Reddy has directed the district administrations to colour-code the samples taken for testing based on four categories. The colour-coding is to prioritise the testing process based on the urgency and types of testing in VRDL/TrueNat/ CBNAAT/ NACO Viral Load Testing labs.

“As Covid cases are increasing, it is imperative that all districts not only achieve testing targets but also ensure that testing is done systematically and expeditiously, so that delays, which are being noticed, are avoided and further follow up action can be taken immediately as per test result,” Jawahar Reddy said, observing that there was a gap between testing capacity, actual number of tests done and updating results.

It may be noted that due to large number testing, there have been instances of delay in getting results. To avoid this, the health department has issued instructions to the district collectors to prioritise the testing process. 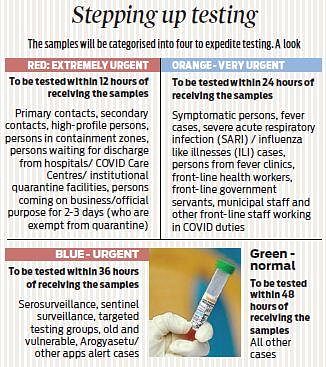 More from Andhra Pradesh.
Now we are on Telegram too. Follow us for updates
TAGS
testing