The surge has been attributed to opening of inter-state borders and resumption of transportation as cases have now reached 40,646 from 15,252 on July 1.

VIJAYAWADA: COVID-19 cases in Andhra Pradesh increased at the rate of 9 per cent in the last one week (July 10-17). From July 6, the daily spike in infections has been over 1,000 and more than 2,000 people have been testing positive everyday for the last three days.

As per statistics provided by the health department, the first infection in the state was reported on March 12 and it took 103 days since then to reach the 10,000-mark. However, the subsequent 10,000 cases were reported in 12, seven and four days.

Given the rate of daily spikes in infections, it is anybody’s guess as to how long it will take the state to cross the 50,000-mark. Meanwhile, the first coronavirus death was reported from Vijayawada on March 30.

Over the next 48 and 33 days, the toll crossed 50 and 100, respectively. Since then, the number of days it took for the toll to increase by 50 came down drastically. It reached the 150-mark in just seven days, and then 200 over the next six days.

While the next 100 deaths were recorded in eight days, it took six days for the overall toll to reach 500 from 300.Going by the statistics, the spurt in cases was observed after March 19 as Delhi returnees, who attended a Nizamuddin Markaz meet, started testing positive. The spike during lockdown was steady till April 20; with relaxations in lockdown norms and partial resumption of inter-state transport, the number of infections started increasing rapidly.

Officials too attributed the rapid surge to the opening of inter-state borders and resumption of all modes of transportation. "It (the rising COVID-19 cases) is not just limited to AP. In fact, the increase in cases was within our expectations. There has been no abrupt increase," said Dr A Mallikarjuna, special officer, COVID Command Control Room.

Another factor that can be attributed to the surging cases is the increase in the testing capacity. "Only by extensive testing can the actual spread of the virus be determined," he added.Vijayawada government general hospital’s epidemiology department head Dr Gopichand said the contact among people increased due to the relaxations in the public movement, a factor that could have led to the increased rate of infections.

"The coronavirus is not a vector-borne disease but a droplet infection. Hence it goes without saying that maintaining physical distance is the best form of prevention. In my opinion, lockdown was not a solution, but a stop-gap arrangement for the official machinery to be prepared to tackle the situation, and it served its purpose. Now, the onus is on the people who have to take a proactive approach to ensure their own safety..." he said.

Dr Gopichand observed that youngsters could contract the virus faster as they roam, meet friends and seldom follow physical distancing norms. They, then, spread the virus to their parents and relatives.  "The condition of people in the 35-46 age group worsens after they catch the virus as several of them suffer from the initial stages of comorbidities. Their immunity weakens if they are infected," he explained.

Meanwhile, there is a difference of opinion among experts as to whether the state is in stage-III (community transmission). "We are still in stage-II as there is no case where the origin of the infection was not traced," Gopichand said

The confirmed cases per million population in the state was 778.35, as against 756.61 in the country, as on Friday. The recovery rate stood at 49.94 per cent as against 63.33 per cent at the national-level. The number of tests conducted so far stood at 12,60,512 with 23,605 tests being conducted per million population.  However, there were several complaints of delay in the announcement of test results.

The officials attributed the same to the piling up of samples at the 19 existing VRDLs. Officials said they were ramping up the infrastructure further to address the issue. "We are sorting out the issue and have increased the testing capacity by adding 13 RT-PCR machines to the existing 47. Seven more are on the way to the state," health commissioner Katamneni Bhaskar told TNIE. 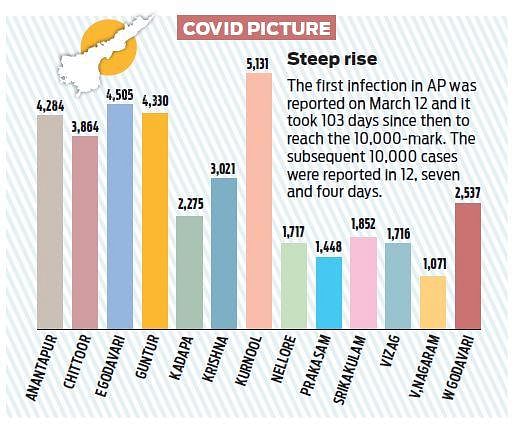