Etcerla Mariyamma, a farmer of Kottagudem, said that she received the bank notice though she did not take any agriculture loan.

SRIKAKULAM: As many as 63 farmers from the district got a rude shock of their lifetime when they received notices from Andhra Pradesh Grameena Vikas Bank (APGVB) asking them to repay the agriculture loans they didn’t take. Agriculture loans were allegedly issued to the 63 farmers of Kottagudem village in Santakaviti mandal by APGVB between 2014 and 2017 without the knowledge of the concerned.

Of the 63 farmers, more than 25 don’t have even a cent of agriculture land of their own. It is alleged that a middleman from the village managed to get the loans by creating fake documents in the name of local farmers. After knowing the real picture, APGVB officials began a probe into the scam. Though the middleman managed to renew the loans initially, he could not manage to do so in 2017. In 2018, the then tahsildar stopped the bogus records after correcting the land records.

Korikana Venkata Ramana, one of the farmers, had received the notice from the bank asking him to repay Rs 1,78,182.26 with interest. Similarly, Vandrasi Ramu got the notice demanding to repay the loan of Rs 1,37,546.19 with interest. Alajangi Chittibabu, Kobogana Sankara Rao and several other farmers also received notices from the bank demanding repayment of loan amount.

Etcerla Mariyamma, a farmer of Kottagudem, said that she received the bank notice though she did not take any agriculture loan. She said that a middleman named Korikana Satyanarayana managed to get the loan without her knowledge.

“When I asked him about the bank notice, he said that he would manage and no need to worry about it,” she said.Alajangi Chitti Babu said that he submitted passbook and other documents to the bank through the middleman. After submitting the documents, the middleman said that the loan was not sanctioned. He later managed to get the loan in his name, Chittibabu alleged. When contacted, District Lead Bank Manager (Union Bank) G Hari Prasad said that the internal probe has already started into the  loan scam. He also said that the officials had taken the issue to the notice of the district collector and he, in turn, ordered an inquiry into the matter.“We will also conduct investigation into each case if the victims approached us,” the Lead Bank Manager added. 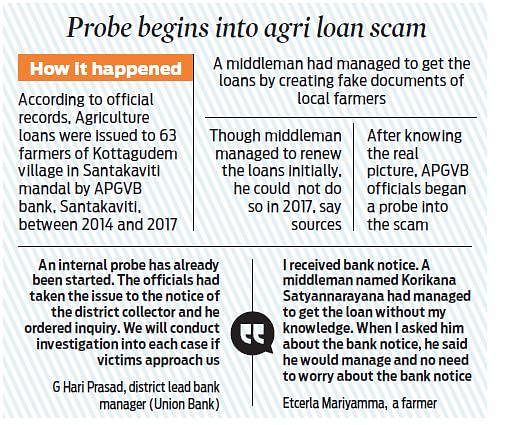 Now we are on Telegram too. Follow us for updates
TAGS
Srikakulam Andhra Pradesh agriculture loans farmers