KURNOOL: Kurnool district police on Tuesday arrested 24 people in connection with the scam at Sri Bhramaramba Mallikarjuna Swamy Varla Devasthanam in Srisailam. The police recovered `83.4 lakh of the total `2.12 crore swindled and seized a car worth `8 lakh from the accused. 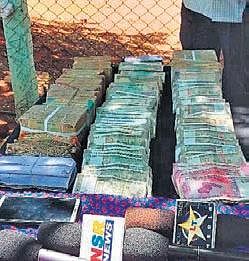 All the accused are residents of the temple town. Atmakur DSP Venkata Rao, the Investigating Officer in the case, said 24 employees of Srisailam temple (20 outsourced and four regular staff worked) had siphoned off `2.12 crore since 2017 by tampering with the software used for booking various Arjitha Sevas and rooms and making donations.

He said they registered four separate FIRs in connection with the loot of `14 lakh of VIP Abhisekham, `56 lakh of donations and Arjitha Sevas and `1.42 lakh of tickets. He said they will recover the remaining amount from the accused soon. The DSP said more accused will be arrested soon.  He said the accused had siphoned off temple funds using the loopholes in the Temple Management System (TMS) and Srisailam Management Information System (SMIS) by double printing, creating fake IDs and changing the login IDs, Venkata Rao said.