Guntur district recorded 14 cases of coronavirus on Wednesday, many of which were reported from the unaffected areas. With the fresh additions, the total number of cases rose to 519.

GUNTUR: Guntur district recorded 14 cases of coronavirus on Wednesday, many of which were reported from the unaffected areas. With the fresh additions, the total number of cases rose to 519.

One COVID-19 related death was also reported from Sattenapalli. The victim, a 60-year-old cloth merchant from the town, was settled in Miryalaguda of Telengana. He died of cardiac arrest in a private hospital on Monday. 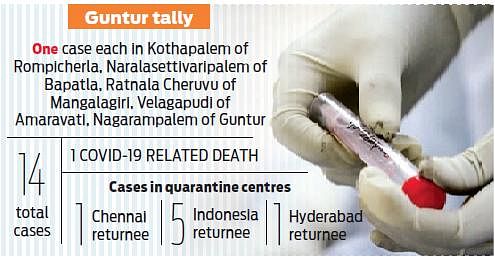 As he was from Sattenapalli, his family requested the authorities that they be given permission for his cremation there. However, as no facility for COVID-19 testing was available at the Sattenapalli government hospital, the body was shifted to Guntur government general hospital where it tested positive for the virus.

Meanwhile, the body was brought back to the Guntur town where the last rites were conducted on Tuesday. As the merchant was infected, his primary and secondary contacts were traced and isolated.

Now we are on Telegram too. Follow us for updates
TAGS
Guntur district COVID19 Coronavirus AP cloth merchant