Another 43 people, who returned to AP from other States, tested positive, taking the total of new cases in the last 24 hours to 141.

VIJAYAWADA: COVID-19 count in Andhra Pradesh crossed 4,000-mark with another 141 cases being reported in the last 24 hours ending 9 am on Thursday.

The total number of cases now stands at 4,112. The toll increased to 71 with three more deaths — one each in Kurnool, Krishna and Guntur districts.

According to the media bulletin issued by the State Command Control Room (Health) on Thursday morning, a total of 9,986 samples in the State were tested and among them 98 people tested positive.  Among the 98 new cases in the State, 19 — all from Nellore district — were linked to Koyambedu wholesale market in Chennai, one of the COVID-19 hotspots in the country.

Another 43 people, who returned to AP from other States, tested positive, taking the total of new cases in the last 24 hours to 141. Meanwhile, 36 more people were discharged from various hospitals from Wednesday morning to Thursday evening after their recovery. Seven, including an 80-year-old woman, were discharged in Kurnool on Thursday evening. 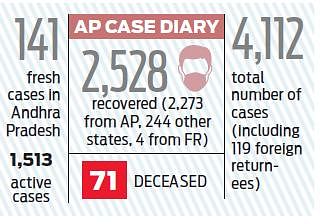 Expressing happiness over the development, Kurnool District Collector G Veerapandian said the number of recoveries in the district now went up to 637. He said as directed by the Chief Minister, those who were discharged were provided Rs 2,000. Meanwhile, as many as 33 among those who returned from other States were also discharged along with three foreign returnees. The cumulative number of discharged from Wednesday morning till Thursday evening stands at 72. As on date, a total of 2,528 people were discharged. The total number of active cases in the State stands at 1,513.

As on Thursday, tests have been conducted on employees in Block 1 and 2 of the Secretariat and the employees of the AP Legislature. Altogether, one each employee from agriculture, revenue and the General Administration departments as well as a police man
in the AP Legislature tested positive so far.

Now we are on Telegram too. Follow us for updates
TAGS
Andhra Pradesh coronavirus cases COVID 19