Later, union leaders met tobacco board chairman Y Raghunatha Babu at the regional manager’s office and expressed their anger for the low prices being offered for their produce.

ONGOLE: Displeased over not getting minimum support price for their produce, tobacco farmers protested by burning tobacco bales near the Kanigiri auction centre in Prakasam district on Saturday. This led to the auctions at the centre stalling for the day. 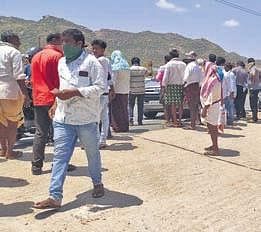 Later, union leaders met tobacco board chairman Y Raghunatha Babu at the regional manager’s office and expressed their anger for the low prices being offered for their produce. They reiterated their warning of going on a ‘crop holiday’ for the next seasons if the government did not take suitable action.

On his part, the chairman said he, on behalf of the board, has spoken to the authorities, exporters and buyers, who assured him that the offering prices would increase in four-five days. “If even then there is no change, we will take strict action against the buyers/exporters.”  Venkateswara Reddy, leader of a farmers’ welfare association, said buyers were deceiving the ryots and attend the auctions in single digits. “Every day hundreds of tobacco bales are rejected and we are fed-up with this,” he added.

Now we are on Telegram too. Follow us for updates
TAGS
Tobacco Farmers Y Raghunatha Babu Kanigiri auction centre Prakasam