Farmers are hopeful of reaping another bumper crop yield this season with the met department predicting a normal monsoon this year.

VIJAYAWADA: With the onset of monsoon in the state, Kharif crop cultivation is steadily picking up momentum. The cultivation target for all crops (food grains, oilseeds, cotton, sugarcane and other crops) in Kharif season has been set at 39.59 lakh hectares as against the normal crop acreage of 37.54 lakh hectares.

Farmers are hopeful of reaping another bumper crop yield this season with the met department predicting a normal monsoon this year. All the major reservoirs in the State are holding 337.58 TMC of water as of June 3 as against 196.76 TMC on the same day last year. Hence, the State may not face any irrigation water problem during Kharif.

Agriculture officials said they have commenced seed distribution by taking village as a unit. According to the data available with the Agriculture department, paddy crop cultivation is at transplantation stage. Pulses, oilseeds and sugarcane crops are at vegetative stage.

As of June 3, sowing was completed in 57,567 hectares as against the target of 39,58,906 hectares. Nellore district with 35,534 hectares of sowing of seeds stands top, followed by Chittoor with 11,510 hectares, Krishna with 4,666 hectares and Anantapur with 3,039 hectares. Sowing operations are yet to commence in Srikakulam, Vizianagaram, East Godavari, West Godavari, Praksam, Kadapa and Kurnool districts. 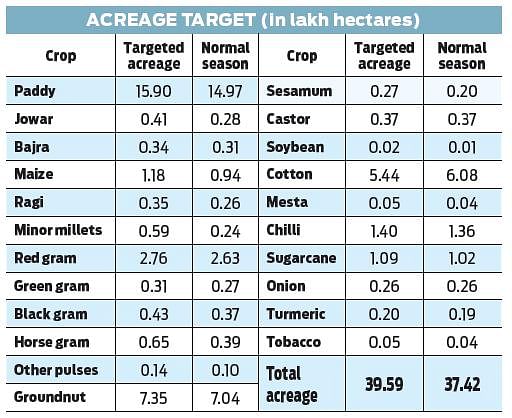 Now we are on Telegram too. Follow us for updates
TAGS
Kharif Crops Andhra Government