SEB arrested 13 thousand people for illegal trade of sand, liquor since May 16

The Special Enforcement Bureau, which has 18 units including five police commissionerates and 13 district units, is headed by an Assistant SP-rank officer in each unit.

VIJAYAWADA: The Special Enforcement Bureau (SEB), which was constituted by the State government  to check illegal transportation of sand and liquor, has registered more than 1,000 cases and seized more than three lakh tonnes of illegally-transported sand since its inception. More than 8,000 cases have been registered and over 11,000 bootleggers arrested in the agency’s drive against illicit liquor.

The SEB was constituted by the State government with senior IPS officer Vineet Brijlal as its head to curb illegal transportation of sand and liquor. With its focus on total liquor ban in phases, the State government wanted to curb illegal smuggling of liquor from neighbouring States and distilling of illicit liquor within the State. Similarly, to ensure that sand is not smuggled or diverted, the SEB was constituted as an autonomous body on par with Anti-Corruption Bureau (ACB), Vigilance and Intelligence departments, to deal with the illegal transportation of sand.

In the enforcement drive conducted from May 16 till date, the SEB sleuths have seized more than 47,000 litres of illicit distilled liquor and destroyed more than 80,000 litres of jaggery wash. With the government increasing the prices of liquor and reducing the number of retail liquor outlets to wean away people from consuming alcohol, reports of distillation of ID liquor in remote pockets of villages, particularly those abutting neighbouring States, came to fore and the SEB cracked the whip on such places with frequent raids.

The SEB, which has 18 units including five police commissionerates and 13 district units, is headed by an Assistant SP-rank officer in each unit. Working in coordination with local police, the SEB  has also put a check on the sale of liquor through belt shops. The SEB has seized more than 27,000 litres of IMFL and 494 litres of beer till now. 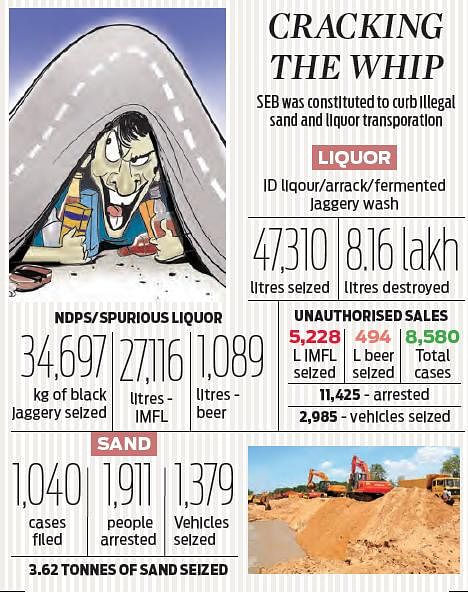 Now we are on Telegram too. Follow us for updates
TAGS
Special Enforcement Bureau