We are transparent in our activities and have always maintained that we will take all requisite clearances before taking up any project. The same was informed to the board as well.

VIJAYAWADA:  The State Water Resources department is all set to submit supplementary details sought by the Godavari River Management Board (GRMB) regarding the projects in Godavari basin. The board, in the recent meeting, had asked both Andhra Pradesh and Telangana government to submit the detailed project reports of ‘new projects’ on the river for the board’s and the Central Water Commission’s appraisal and for the sanction of the apex council.

For the record, even though both the States have already submitted the DPRs of Pattiseema and Purushottapatnam lift irrigation schemes, the GRMB sought a few more details, which the State Water Resources department agreed to submit. Regarding the DPRs sought by the Krishna River Management Board (KRMB), the State officials requested the board to substantiate the claims of Telangana, which alleged that the project proposed by Andhra Pradesh would ‘adversely’ impact it and is in contravention of the provisions of AP Reorganisation Act. 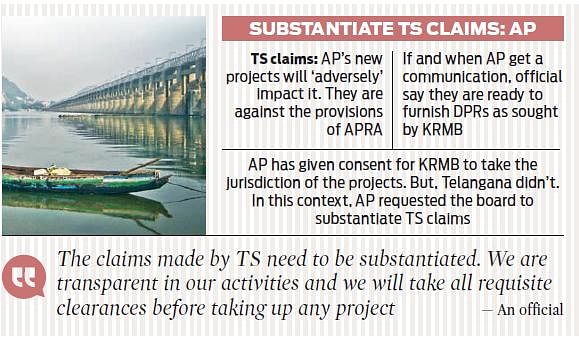 The Telangana government, had written to the KRMB in January,  against AP’s proposed ‘new projects’ in the basin and requested the board to ‘advise’ the neighbouring State to not to go ahead with the project. “The claims made by the Telangana government need to be substantiated. We are transparent in our activities and have always maintained that we will take all requisite clearances before taking up any project. The same was informed to the board as well.

We have also given our consent for the board to take the jurisdiction of the projects. But, Telangana didn’t. In this context, we requested the board to substantiate the claims of Telangana with evidence. So far, we haven’t received any communication in this regard. If and when we get it, we are ready to furnish the DPRs as sought by the KRMB,” a senior official explained. It may be recalled that both the States have been at loggerheads after the Telangana government raised an objection to the proposed Rayalaseema Pumping Scheme and upgradation of Pothireddypadu head regulator canal.

Though the proposed project, the Andhra Pradesh government clarified, is only to supplement the existing mechanism, Telangana alleged that it would adversely impact its projects. Following this, the AP officials also raised objections to several projects taken up by the Telangana government. The KRMB held a meeting after the Union Jal Shakti Minister directed it to convene one and asked both the states to submit DPRs of old and new projects which were not appraised by the board. Telangana officials said it would submit details after getting permission from government.

Apex council meeting
GRMB and KRM are likely to write a letter to AP and TS reminding them to send agenda points for the soon-to-be convened apex council meeting. The meeting is expected to be held in within a month

Now we are on Telegram too. Follow us for updates
TAGS
Godavari River Management Board