Ongole under total lockdown from today

ONGOLE: Ongole will go under total lockdown for two weeks from Saturday, officials said. They added that Prakasam collector Pola Bhaskar declared the entire city as a red zone on Friday in the wake of the district recording 268 total cases of the coronavirus till Friday morning. According to officials, all forms of transportation will come to a halt and no APSRTC buses will be allowed into the city; all liquor stores will remain closed for 14 days from Saturday. 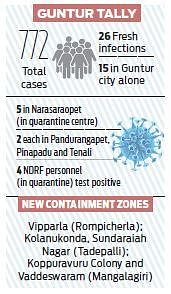 The restrictions to be implemented will be as per the directives in the Covid-19 GO No.: 50. Only one person from each family will be allowed to come out to buy essential commodities and vegetables within the permitted timings of 7 am to 10 am; check-posts will be established at all exit points. As per the revised lockdown norms, radiuses of 200 metres and 400 metres from a patient’s residence will be considered containment and buffer zones, respectively.

The move came after a committee, comprising OMC commissioner P Niranjan Reddy, ZP CEO Kailash Gireeswar, MEPMA project director and DSP KVVNV Prasad, submitted a comprehensive report on the measures to be implemented in the city, to the collector. Meanwhile, 38 infections were reported from Prakasam in the last 24 hours ending Friday 9 am, the highest singleday spike. Of the 268 infections in the district so far, Ongole has contributed 69 confirmed cases.

Of the 26 patients still under treatment at the isolation ward of the GGH, 22 were confirmed to be carrying the virus in the last two days. The authorities have traced 150 more contacts of the patients.

Now we are on Telegram too. Follow us for updates
TAGS
Ongole lockdown