Another 83 cases were reported from those who returned from other states and 18 among foreign returnees.

VIJAYAWADA:  COVID-19 toll in Andhra Pradesh reached 101 with five more deaths reported in the last 24 hours ending 10 am on Saturday. The Coronavirus  count increased to 8,452 with 491 new cases, the highest single-day spike so far.

No casualties were reported in West Godavari, Kadapa and Vizianagaram districts and among those who returned from other States and foreign countries.  As per the news bulletin issued by the State Command Control Room (health) on Saturday evening, 22,371 samples were tested, the highest in a single day so far. Out of them, 390 tested positive. Another 83 cases were reported from those who returned from other States and 18 among foreign returnees.

The State Command Control Room, which had stopped giving district-wise report on COVID-19 case status, on Saturday started giving the numbers and the details of coronavirus infection among foreign returnees and people returned from other States. The highest number of cases in the last 24 hours was reported from Anantapur district. A total 97 cases were reported in the district, followed by West Godavari 65, Chittoor 51, Krishna  51, East Godavari 41, Guntur 17, Prakasam 16, Kurnool  15, Kadapa 51, Visakhapatnam 15, Nellore 6 and Vizianagaram 1. No new cases were reported from Srikakulam in the last 24 hours. 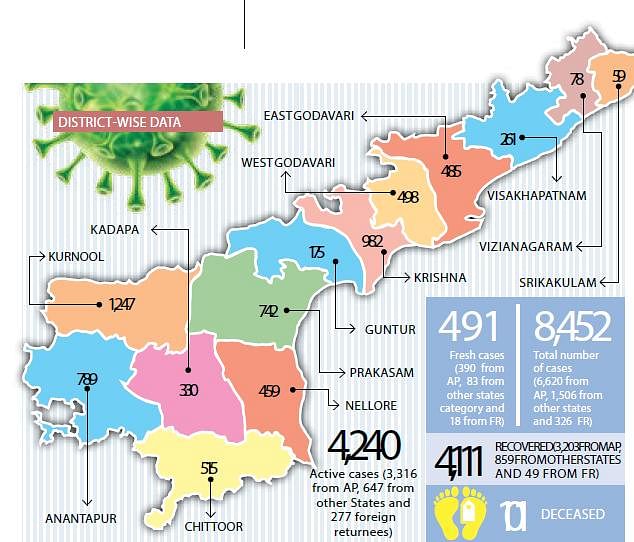 On the other hand, among the foreign returnees, the highest number of cases (289) were reported from those who returned from Kuwait followed by Dubai (UAE) 10, Qatar 7, Indonesia 5, Abhu Dhabi 4, Kazakhstan 3, South Africa 3, Bahrain 3, Muscat (Oman) 1 and Sudan 1.