The committee was constituted under the chairmanship of Neerab Kumar Prasad, Special Chief Secretary to the Government, (Environment and Forests).

VIJAYAWADA: The State government has extended the time for the High-Powered Committee constituted to probe into the causes behind the styrene gas leak from LG Polymer plant at in Visakhapatnam and to take stock of the recovery steps being taken in response to the incident, till June 30. The committee was constituted under the chairmanship of Neerab Kumar Prasad, Special Chief Secretary to the Government, (Environment and Forests). 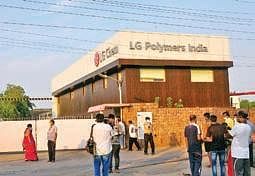 Though the committee was supposed to submit its report within a month by June 7, the government earlier extended its time till June 22. The panel has sent a questionnaire to LG Polymers Private Limited on May 29 through the Director of Factories and sought reply by June 5. Later, the Committee again sent some additional questions through Director of Factories on June 5 for furnishing reply by June 7. Though the report was not submitted by LG Polymers by then, the High-Powered Committee heard the company representatives on June 8 at Visakhapatnam.

The company was asked again to submit the report during the hearing. The company did not submit its replies to the HPC within the time limits. Finally, the company submitted detailed response to some of the questions on June 18, 19 and 20. The committee, in its meeting on June 20, observed that the response of the LG Polymers need to be thoroughly examined and requested the government for extension of time for a week to consider the replies of the LG Polymers and requested for extension of time to submit its report. “Considering the request, the time for submission of report by the committee is extended up to June 30,’’ a GO issued on Thursday read.

Now we are on Telegram too. Follow us for updates
TAGS
LG polymers Styrene gas leak