VIJAYAWADA: With four more Covid-19 patients dying in the last 24 hours ending Saturday 10 am, the toll in Krishna district has reached 53. Krishna is followed by Kurnool (52 deaths) and Guntur (17).

According to information provided by health officials, the State government confirmed the first Covid-19 death in the State in Krishna district on April 3. The victim, a 55-year-old diabetic man suffering from heart diseases, succumbed to the virus on March 30. He contracted the virus from his son who returned to Vijayawada on March 17 after attending the Tablighi Jamaat meeting in New Delhi.

Till June 1, 17 more died of the virus in the district. However, there was a steep rise in the fatality rate after the relaxations as part of the Centre’s ‘Unlock 1.0’ . Of the total 53 fatalities so far, 35 were reported in the last 24 days (since June 3), according to a health bulletin released by the government. 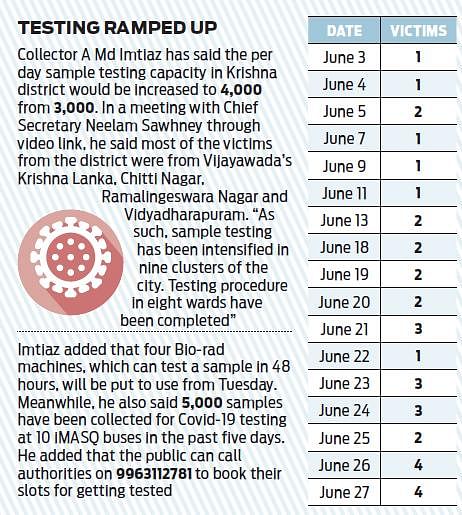 The head of the Epidemiology department at the New Government General Hospital (GGH), N Gopi Chand, said a majority of the victims in Krishna were more than 50 years old and comorbid. “According to my observation, people above 50 years who contracted the virus showed symptoms after three days and started taking treatment for Covid on fifth or sixth day of being infected. Due to this, the virus spread rapidly in them, making it tough for the doctors to treat them for the virus and other complications,” he said.

On the steps being taken by the Health Department to contain the spread of the virus, the epidemiologist said sample collection has been intensified in the district through 10 intelligent monitoring analysis service quarantine (iMASQ) vehicles arranged in six locations including Vijayawada and others.

“The steady rise in infections may continue for sometime and it may take one more month for us to analyse the severity. As a precautionary measure, door-to-door surveys were already launched to collect samples from symptomatic and comorbid persons. If a sample tests positive, the patient will be treated for the virus and other health complications; others are advised to remain indoors and avoid going to public places,” Gopi Chand added.

Corona count at 1,252
Krishna district reported 53 more Covid-19 cases on Saturday, taking the tally to 1,252. Forty-two of them were recorded in Vijayawada alone and the remaining from Machilipatnam division. In a meeting at his camp office, District Collector A Md Imtiaz said the administration has decided to adopt 3Ts--tracing, testing and treatment--as part of the efforts to curb the spread of the killer coronavirus.
Machilipatnam tahsildar NSK Khajavali noted that the division has 30 active containment zones.

Now we are on Telegram too. Follow us for updates
TAGS
Krishna district Covid-19