The animal husbandry department, with the help of National Disaster Response Force identified the carcasses of at least 32 animals by 3 pm on Friday.

VIJAYAWADA:  The styrene gas leak accident occurred in Visakhapatnam in the early hours of Thursday, has not only claimed the lives of 12 persons but also has led to the death of 32 animals.

The animal husbandry department, with the help of National Disaster Response Force, identified the carcasses of at least 32 animals by 3 pm on Friday.

This apart, 199 animals have been treated so far. Several teams of veterinarians accompanied by paramedical staff have been deployed in the 13 nearby villages to look for affected animals.

"Majority of animals were brought in time to the hospital by these teams," he explained. 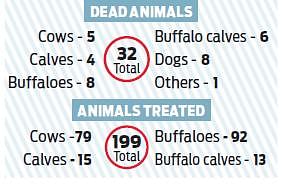 e teams are going around the villages and trying to locate animals which have been affected due to the gas leak.

While they are providing preventive medication to all the animals even if they did not show any symptoms of breathlessness, the already affected and critical ones have been sent to the hospital.

However, the toll of birds and poultry is yet to be known.

"The teams are trying to find carcasses of birds as well. But,  they are facing a few difficulties and so we do not have the toll of birds or poultry as yet," Srinivas Rao observed.

He further said that several villagers have left their cattle and poultry behind and have moved to safe places.

"When our teams went to the villages they found that almost all villagers had left behind their animals and had moved to safe places. This is also the reason why more poultry or cattle were not brought to the hospital by them," he pointed out.

The teams are facing problems due to this as they cannot leave the cattle and poultry at the homes of villagers; neither they do have any safe place currently to take them and keep, nor are they able to find their owners to return the poultry and cattle to them, he said.

Scientific studies and research state that the short and the long-term effects of the gas on animals are very much similar to those on humans.

However, the animals are more sensitive towards the gas than humans.