Buses are back in Andhra Pradesh; book your tickets online

After 58 days of remaining at bus depots, APSRTC buses will hit the roads from all 126 depots in the State from 7 am on Thursday.

VIJAYAWADA: After 58 days of remaining at bus depots, APSRTC buses will hit the roads from all 126 depots in the State from 7 am on Thursday. At first, 1,683 buses will be operated on 436 routes within the state. Bookings began at 4 pm on Wednesday on the Online Passenger Reservation System (OPRS). The OPRS, however, witnessed glitches initially.

“The server remained busy for a while, but the problem was rectified and people can now book tickets,” an official said. In urgent cases, and for those who cannot book online, tickets may be bought at special counters in the bus stations. 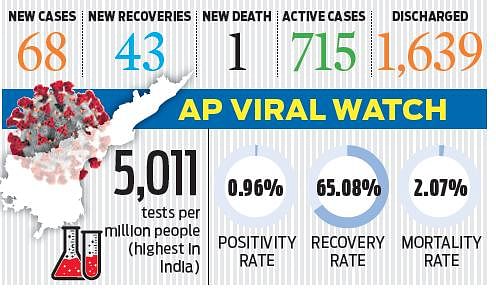 Buses will not make any stops between the source and destination, and services within the city (in Visakhapatnam and Vijayawada) will not be resumed for now. Between 100 and 110 buses will be operated from each of the 13 districts.

Seats have been modified in Super Luxury, Ultra Deluxe, Palle Velugu and Express buses to ensure there is no physical contact between passengers.

APSRTC to operate only non-AC buses

For now, the APSRTC will only operate non-AC buses. But if needed, AC buses will be used, with the temperature set to 26 degree Celsius. However, blankets will not be provided, and there will be no attenders in the buses to assist passengers. Pratap requested people above the age of 65 and below 10 not to travel for anything other than an emergency.

“Of the 12,600-odd buses, 1,683 will be run across the state including in red zones. The remaining buses will also be used, but in a phased manner,” Pratap said. The buses won’t have on-board conductors as there is a risk of them turning super-spreaders of Covid-19. Pratap pegged the losses incurred by the APSRTC during the last two months at Rs 12,000 crore.

“The corporation is not in a position to pay power bills at 425 bus stations. March, April and May are crucial months for the APSRTC to augment revenue, as several people travel for the summer vacation and weddings.

However, with the lockdown, that was not possible this year,” he said.

However, there are no plans to increase the bus fare. In a recent videoconference with Union Transport Minister Nitin Gadkari, state Transport Minister Perni Venkataramaiah sought Rs 700 crore to cover the losses caused by the lockdown. Gadkari responded positively to the plea.

The corporation is also focusing on making money by encouraging cargo services. Around Rs 72 crore was earned through cargo services last year. Officials were told to modify scrapped buses and use them to transport cargo. “The APRTC has earned Rs 25 crore through cargo services for AP Seeds, and tenders worth Rs 250 crore were quoted by the Civil Supplies Department for transporting essential goods,” Pratap said.

All passengers will have to download the Aarogya Setu mobile app so they can be tracked in case of any eventuality, Andhra Pradesh State Road Transport Corporation (APSRTC) vice chairman and managing director M Pratap said. The APSRTC will store passengers’ data for 15 days.

Masks are also mandatory, and can be bought from stalls at bus stations for Rs 10 each. Automatic hand sanitising machines have also been set up at bus stations