Covid toll at 55 with one more death, 62 new cases in Andhra

The positivity rate in the State is at 0.94 per cent, which is better than the national average of 4.36 per cent.

VIJAYAWADA: Another 62 new cases reported in the last 24 hours ending 9 am on Friday took COVID-19 count in Andhra Pradesh to 2,667. The COVID-19 toll increased to 55 with one more person succumbing to the virus in Krishna district. 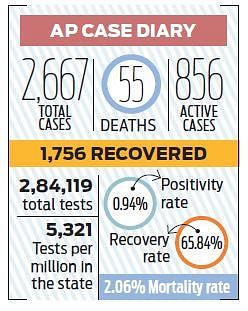 According to a media bulletin issued by the State Command Control Room (Health) on Friday morning, out of 62 new cases, 18  — 14 from Nellore and 8 from Chittoor — were linked to Koyambedu Wholesale Market in Chennai. A total 8,415 samples were tested in the last 24 hours.

Though one COVID-19 death was reported by East Godavari district officials on Thursday, the same was not reported in the Friday media bulletin. Meanwhile, eight primary contacts of the 60-year-old victim in G Mamidada and neighbouring village tested positive for the virus on Friday.