Meanwhile, 1,549 patients getting cured from the infection in the same period brought down active cases to 21,235.

VIJAYAWADA: As eight of the 13 districts reported less than 100 new COVID-19 infections, Andhra Pradesh on Monday saw its aggregate grow by 1,392. East Godavari recorded the highest 341 cases, followed by 243 in West Godavari; the one-day spike in Kurnool district was the lowest 36.

According to the media bulletin released by the State Command Control Room, 61,050 samples getting tested in the 24 hours ending Monday 9 am took the tests conducted so far past 87 lakh.

Meanwhile, 1,549 patients getting cured from the infection in the same period brought down active cases to 21,235. Overall, more than 8.16 lakh persons who tested positive for COVID-19 have recovered in the state.

Meanwhile, 11 patients succumbed to the virus in the 24 hours with Krishna district alone contributing five deaths. Two casualties were reported from Kadapa and one each from East Godavari, West Godavari, Guntur and Viskhapatnam. 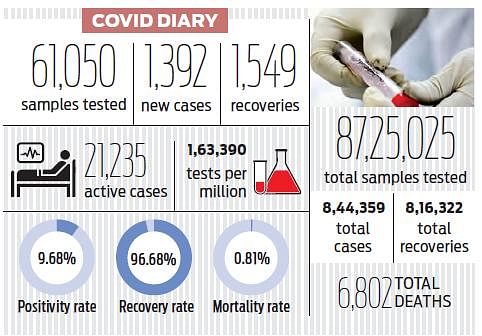